App of the Week: The Amazing Spider-Man

Bear in mind that I haven't seen the latest Spider-Man movie.  I didn't have much interest in a reboot this quickly, so I didn't follow it or spoil the story by reading plot synopsis.  It may have had something to do with The Lizard being the primary antagonist and the retelling of an origin story that turned me off.  Either way, I went into The Amazing Spider-Man blind.

The first thing that struck me was how incredibly detailed and generally good-looking the game is.  For a phone title, especially a Windows Phone title, it's heads above most games.  While Spider-Man himself is impeccably rendered, the same can't be said for the denizens of this digital New York City.  Of the dozen or so blocky character models, all look like they were made with last generation's technology when compared to Spidey.  Environments suffer the same fate when viewed up close.  It's not terrible for a mobile game, but what can be terrible is the framerate.  When Spidey really picks up speed and begins to swing across the wide-open world, the game can stutter as it tries to load new scenery, traffic, and NPCs.  The stuttering isn't constant, but textures popping in are.  No matter if you're high above the Manhattan skyline or running through Central Park, textures always pop in versus loading smoothly. 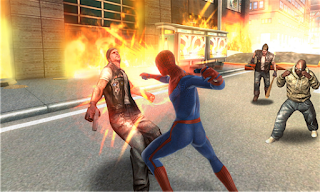 Despite the constant visual problems, Spider-Man handles quite when when web-slinging.  One virtual button is used for jumping and once Spidey is air-borne, the same button is used to shoot webs .  It's easy enough to maneuver over the buildings, but it can be kind of awkward on the ground or when trying to move quickly between buildings.  But this is a problem I've noticed with all mobile games of this nature.  Virtual controls will never be as responsive or precise as an analog stick.

The Amazing Spider-Man is a lengthy title which will keep players occupied for several hours.  In fact, I've killed my battery a few times due to extended play sessions.  This can be problematic because when playing on the Nokia Lumia 920, as I noticed it got very warm to the touch.  There are over 25 missions to complete with dozens of side objectives like stopping armed robberies and collecting lizard scales. 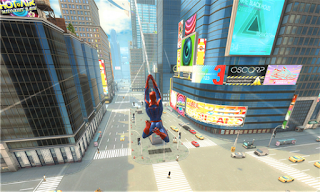 As players progress through the missions, they're rewarded with points which can be spent to upgrade abilities and learn new skills.  While Spidey will never be an over-powered behemoth, it's enough to keep the playing field level when tackling boss fights.

While the story is bland, the voice acting is painful.  Spider-Man's whiny voice comes off as a teenager just hitting puberty and the horrific jokes and one-liners are enough to warrant skipping the cutscenes.  Where's Neil Patrick Harris when you need him?

One mind-boggling aspect is the inclusion of an in-game cash shop.  Along with the experience points that come with completing a level, Spidey also gets "spiders" which are an in-game form of currency.  These points can be spent on health potions, cards that allow a player to skip a mission, and alternate costumes.  The one item that I had my eye on was the black spider suit.  The suit costs 20,000 spiders and after playing for several hours, I only have about 1/4 of them.  If I were to shell out real world cash for the spider equivalent, the figure comes to $50.  That's right.  $50 for a digital item in a mobile game.  The pricing is seriously screwed up and the publisher really needs to consider their pricing plans.  I can't think of anyone that would invest that much cash in a $7 mobile game.

As a whole, The Amazing Spider-Man is one of the better titles for Windows Phone 8.  The graphics are impressive, the controls are responsive enough, and the title is entertaining from start to finish.  The few complaints aren't enough for me to say "Stay away."  At $6.99, you may want to install the trial first, but any Spider-Man fan should enjoy themselves.  And who doesn't like Spider-Man?