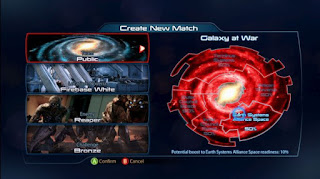 Mass Effect 3 took a bold new step with the addition of multiplayer.  Galaxy at War pits a team of four against eight brutal waves of Cerberus agents, Geth, or Reapers.  Players take on the roles of Mass Effect’s classes and must survive 11 waves while completing objectives.  Surviving grants credits which can be spent on new characters and gear.  If that’s not enough to convince you, here’s five reasons why you should try Galaxy at War.

1.      All the fun of single player combat with friends
BioWare’s fantastic storytelling abilities are well known and evidenced in all of their games.  While combat has also been fun, it wasn’t anything special until Mass Effect.  Over the course of the series it has been refined into near perfection through revolutions in squad combat mixed with exotic powers.  Multiplayer takes all the fun of single player and condenses it into half hours excursions of explosive gameplay.  Imagine the powers of four Commander Shepards coming to bear on the unending hordes of enemies.  Matches are fast, action-packed, and full of excitement and tension until the final round ends.

2.      Plenty of classes and customization
Players can choose from all of the classes available to Shepard from single player and then some.  As players progress towards the level cap of 20, they are awarded skill points which can level up class specific abilities.  Players can use up to three skills and equip two weapons.  A balance must be found between the power of the weapons and the recharge of skills (i.e., loading a character up with more powerful weapons increases the recharge time on powers).  Players can also packs containing new weapons, weapon modifications, weapon upgrades, and character customization options.  With all these options available, players can tailor any number of characters to their unique design. 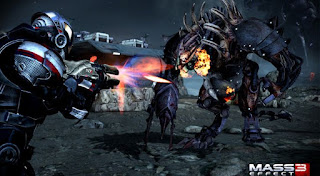 3.      Strategic, squad based gameplay
In order to survive the nearly overwhelming odds, players will need to work together.  This means picking classes that complement one another, communication, and strategic positioning.  While it is possible for higher level players to survive the lowest difficulty on their own, team work is the key to succeeding.  This is especially true when it comes to completing the carious objectives throughout matches.  So get three of your best friends together and suit up.

4.      Multiplayer influences single player
While the amazing gameplay, leveling up characters, and acquiring more items is incentive enough to play, Galaxy at War directly influences Mass Effect 3’s single player campaign.  There is a rating which shows how well the galaxy is faring against the Reaper invasion.  Successfully completing missions in Galaxy at War improves the odds of achieving the perfect ending in single player.  While it’s not necessary to compete in multiplayer for the perfect ending, it certainly helps. 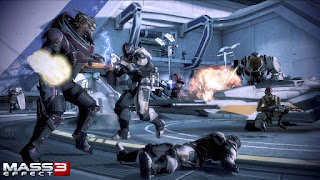 5.      Replayability
Unlocking new characters, classes, customizations, weapons, weapon mods, and perks is all done through purchasing packs in between matches.  The contents of each pack are randomized, but purchasing higher level packs improves the odds of obtaining better level items.  And the galaxy’s readiness level decreases over time, so playing Galaxy at War is necessary to keeping the galaxy prepared.  Of course, these are the mechanics designed to keep you playing for a reason.  BioWare is constantly releasing missions and updates for Galaxy at War which have been completely free to download and play.


Galaxy at War is incredibly fun to play and is a large part of why many players still have Mass Effect 3 sitting in their system trays.  Mass Effect 3 is an incredible addition to the Mass Effect series thanks to its amazing single player mode.  The surprising inclusion of multiplayer is what will keep this game fresh for years to come.  So why are you still reading this?  Go play Galaxy at War now.
Game Reviews