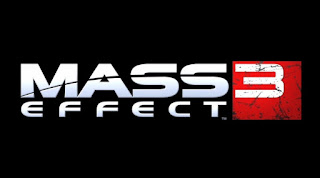 It’s been a long ride.  Since its initial release in 2007, Mass Effect has captivated millions with its rich and imaginative world.  From chasing a rogue agent to uncovering a plan to annihilate nearly every living thing in the galaxy, our future would be a grim one if not for the exploits of one Commander Shepard.  Mass Effect 3 marks the end of what can only be considered one of gaming’s greatest trilogies.  With so much anticipation, can Mass Effect 3 live up to its own legend?

Picking up months after the events of Mass Effect 2’s DLC, Arrival, Commander Shepard is on Earth facing trial for his hand in the death of 300,000 batarian colonists.  During his testimony, reports begin flooding in that outposts in our solar system are going offline.  It’s only moments before the Reapers arrive on Earth and begin laying waste to its population.  After narrowly escaping the initial assault and being reunited with the Normandy and her crew, it falls on Shepard’s shoulders to unite the various species of the galaxy and find a way to put an end to the Reapers once and for all. 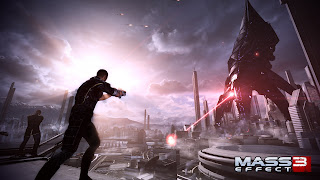 Needless to say, the events in Mass Effect 3 play out in grand style.  The Reaper invasion sets the tone for the rest of the game as everything comes across as larger than life.  While everything plays out at such a large scale, it feels a bit rushed after the initial missions.  The Reapers are an ever present threat in the game and as such, the majority of missions revolve around rallying forces and finding a way to combat this nigh-invulnerable menace.  This doesn’t leave a lot of room for side missions which can now be picked up by eavesdropping on conversations.  As the main storyline progresses and the Reapers invade more of our galaxy, some planets end up cut off and their side mission objectives are lost forever.  When compared to the series’ past entries, Mass Effect 3 feels a little light in sheer quantity of missions.  It’s clearly focused on telling the grand finale and tying up loose ends versus expounding on much more of the universe.  This does make sense from a story telling perspective as many of the side missions are not that important.  What is particularly great is how content from media outside of the books has found its way into the game.  It fleshes out certain events and is a great reward for those fans extremely dedicated to the series.

While a lot is done incredibly well with the story, which is par for any BioWare game, Mass Effect 3 falls apart at the most critical point, the ending.  Without spoiling too much, the player is confronted with a series of choices with which the outcome isn’t influenced by any of the decisions made across the span of the three games.  For a series where decisions drastically change the landscape of an entire galaxy, it’s hard to understand why the ending of the series would be painted with such broad strokes.  On top of that, there isn’t much that is resolved with any of the endings.  In fact, they lead to more questions than they answer and it’s up to the players’ imagination to fill in the gaps.  As tremendous as the series and Mass Effect 3 in particular is, the ending is definitely wanting for more. 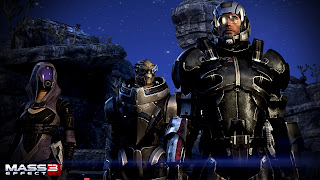 Accompanying Shepard are plenty of familiar faces and a few new ones.  While some series staples like Liara, Garrus, and Tali join Shepard on-board the Normandy, many others do not.  Nearly every squad member from past games has a reason not to join Shepard.  While this makes room in the spotlight for the new characters, said characters don’t hold up well in that spotlight.  New squad members James and Javik are rough, abrasive characters who don’t provide much after their trust is earned.  It’s disappointing, especially in the case of Javik, whose race has been clouded in so much mystery, when he ends up just being a dick and never makes it into the squad rotation.

Character progression has seen some advances since Mass Effect 2.  Powers now split into two branches with unique enhancements.  For example, players can choose having powers recharge quicker or hitting harder.  Weapons can now be modified and equipped with different parts to improve performance in battle.  Also, depending on weapon type and the modifications it has, power recharge speed is also affected by the weapons equipped.

Combat is nearly identical to Mass Effect 2.  Voice commands can now be issued via the Kinect, but it can be hit or miss as far as squad mates responding to commands.  Enemy AI has definitely seen an improvement as enemies work more as a team to flank, outmaneuver, or flush out players from cover.  There’s greater variety in the enemy types as well with armored Cerberus mechs, deadly ninja assassins, and Reaper mutants joining the fray.  Enemies aren’t the only ones with new abilities though.  Commander Shepard now has greater mobility in the battlefield and can seamlessly slip to new cover positions, roll out of the way, and devastate foes with a new melee attack.  These changes provide a more active and engaging experience versus past entries’ cover-and-shoot style. 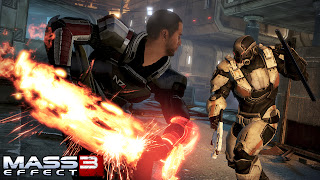 This refined combat finds its way into the new multiplayer mode, Galaxy at War.  Four players must survive 11 waves of nearly unending enemy hordes.  Choosing one of the various single player classes, species, and weapons, players have an incredible amount of customization at their fingertips.  Matches typically take a half hour to complete and this makes it easy to get quick doses of the fantastic multiplayer.  Throughout the 11 waves, players will have to complete random objectives like eliminating enemy targets, capturing control points, or retrieving enemy data.  It’s a great touch and helps break up the monotony of endlessly shooting AI targets in the face.  Completing matches awards experience and credits.  Characters can reach level 20 and have many of the abilities available that are in the single player portion of the game.  Credits are used to purchase equipment packs which contain random weapons, mods, classes, species, and customization options.  The quick play sessions combined with the anticipation of getting that next great item makes for some incredibly addictive gameplay that gives Mass Effect 3 some much needed longevity after players have completed the story.

Stunning doesn’t even begin to describe the visuals.  Every planet and set piece is rife with painstaking detail and beauty.  There isn’t a single area in the game that doesn’t feel wholly unique or out of place.  Like a neatly lined row of dominoes, everything falls into place.  From environments to character models to skill and weapon effects, Mass Effect 3 is a feast for the eyes.  There is the occasional collision issue and overlap, but these blemishes are few and far between.  It’s incredibly easy to get lost and transported to the worlds that inhabit the vast reaches of space. 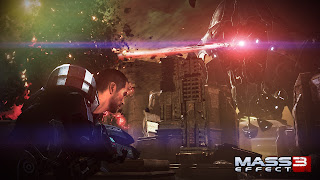 Much like previous entries, Mass Effect 3’s soundtrack is just as powerful and moving.  Combined with the spot on sound effects and world class voice acting, there is just as much love for the ears as the eyes when playing.

Mass Effect 3 is a great ending point for the series, but not a perfect one.  While so much was done near perfection, the ending casts a long shadow over the entire experience because of how unfulfilling it is.  This is not a series that can be casually stepped into and most players have not.  They have spent the course of five years playing and the reward for such dedication is simply lackluster.  Despite the ending, Mass Effect 3 is definitely worth purchasing and the series as a whole is truly unlike any other.  Even with a stumble at the end, BioWare has struck gold once more.
Game Reviews