App of the Week: Comics 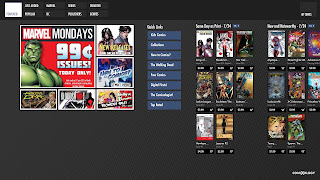 For too long have Windows users not had access to the world's greatest collection of digital comics.  Now fans of graphic novels from publishers like Marvel, DC, Image, and many others can enjoy their collections online.

ComiXology at one time had a DC Comics app available for Windows Phone 7/8, but it has since been pulled from the store.  As of this writing there has yet to be another official app announced.  For those, like myself, entrenched in the Windows ecosystem, our only option is Comics for Windows 8/RT.  But what a wonderful option it is.

Comics is a beautifully simplistic app.  The main page displays all the relevant information to keep readers up to date as far as new releases are concerned.  Swiping down from the top gives a few more categories to search from.  All are great ways to browse and find new a new series to fall in love with.  Of course users can use Windows 8's built in search feature to specifically search for a title.

One gripe is the inability to see new comics available for a series.  Another comic reader app, Manga Z, has the abilities to pin multiple series as favorites.  It will then alert readers when a new issue or chapter is available.  As it stands, it's a bit of a hassle to search for a series that I already own two years worth of issues, just for a new issue.

Of course, one of comiXology's most highly touted features is the Guided View.  With this mode enabled, readers are directed from pane to pane automatically.  It focuses their attention as it would when they read normally by zooming in on specific panels.  It's absolutely terrific on smaller touch devices where it can be hard to read the small text of a full sized page.  However, on larger devices, it's not so much of a necessity.  Still, it's a nice option.

The selection of comics available is simply astounding.  Just the other day, I found the complete Battle Chasers collection.  I had been looking for this series for the past several years.  The entire nine issue series was available for only $13.  It was a terrific buy and one I'd highly recommend to anyone looking for something new to read.

Since Comics is a free app, there's no reason not to get it.  And with a selection of free comics available every week, there's something to enjoy for even the most frugal fan.  This app is a definite must-have.
App of the Week