August 15, 2013
It's been a long time coming, but I finally received notice from Microsoft regarding two very important items in my household, Microsoft Points and the Xbox Live Family Gold Pack.  Microsoft is doing away with both services this year.

In the case of Microsoft Points, all existing points are being transferred over to real-world currency.  This means users won't have to do any mental math to figure out how much a XBL purchase really is.  Any existing points will be converted over and Microsoft has sent out the remaining balances for Xbox Live Rewards.  In my case, I had 110 points that were being held by Microsoft that were deposited in my account.  In conjunction with the termination of the Microsoft Points system, Microsoft is also terminating the Xbox Live Rewards program.  No longer will players earn "free money" for being loyal subscribers. 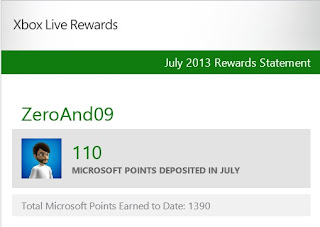 From this point forward all purchases in the Xbox Live, Windows Phone 8, and Windows 8 stores will carry their real-world currency value instead of the needless MSP value.  This is something that many have been clamoring for over the past few years.  Other major service providers like Sony's PlayStation store and Apple's App Store use real-world currency.  It's about time Microsoft joined them.  Expect the changes to roll out later this year.

The other, more disappointing news, is that Microsoft is terminating their Xbox Live Family Gold Pack.  Later this month on August 27, 2013, accounts in the family plan will be broken up into individual Gold memberships.  Each account under the previous membership will have the same amount of time remaining on them and a bonus three months.  Microsoft has this to say on the matter "We continually evaluate our offerings and are always working to provide services that best meet the needs of our customers and Xbox.  Any accounts in an Xbox Live Gold Family Pack are being converted to individual Xbox Live Gold memberships to prepare for new and exciting upcoming benefits and features on Xbox Live Gold.  Through the new Home Gold feature, a single Xbox Live Gold membership allows anyone in your home to enjoy many Gold features like multiplayer, access to Gold entertainment apps, and more on your Xbox One."

Unfortunately, this is a stiff middle finger to those that don't adopt the Xbox One when it launches later this year.  A Xbox Live Gold Family Pack allowed four Xbox Live Gold memberships for less than the price of two individual Xbox Live Gold subscriptions.  It was a great way to manage a family of four and save a considerable sum of money.  Now, Xbox 360 users will be forced to pay more to keep the same services for all accounts.  The new features on Xbox One will be welcome, but bear in mind that this is a service that many believe should be free.  The fact that Xbox is the only platform that forces members to pay a subscription just in order to access other premium services like Netflix is ridiculous.

It seems to be one step forward and two back for Microsoft.  The loss of the points system is welcome, but the loss of the Family Pack riled every user in my household.  It's just another little nudge towards joining the glorious PC gaming master race.