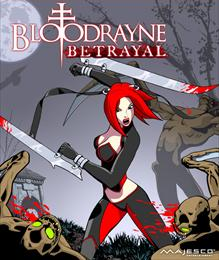 The Bloodrayne series enjoyed some moderate success when it was first released.  It combined three great gaming elements into one seductive package: sexy women, killing Nazis, and vampires.  Add in a lackluster sequel, some truly awful movies, and a tacky Playboy spread and times have been tough on titular hero Rayne.  Developer WayForward Technologies are looking to turn things around for her with the help of publisher Majesco.  Will the transition to 2D and a focus on compelling gameplay bring focus to this series?


Betrayal features simple, yet polished, visuals.  The sprites are rendered well, with no jagged edges and silky smooth animations.  But they lack meaningful detail.  Characters look like the pinnacle of Flash games.  They serve their purpose when the frame encompasses a large area, but as enemies are cleared, the camera zooms in on the action until it’s just Rayne and her last victim.  It’s at this point that the basic character models stand in stark contrast to the more classically rendered background art.


Looking at the backgrounds makes it easy to think one is playing a hi-def Castlevania.  From the gloomy, overgrown wooded hills to the beautifully ornate, gothic castle interiors, it’s a visual treat.  But for all the impeccable attention to detail in the environments, the designers leaned heavily on using reds and black.  Due to the restricted color palate, many elements bleed into one another.  It’s a shame because all of that wonderful art is reduced to two tones for the majority of the game. 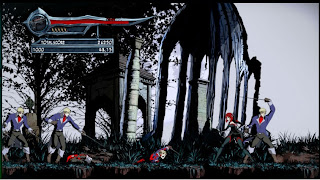 Betrayal is a very artistic game.  The largely two tone palate is just the start.  There are multiple sections where the foreground dominates the screen and Rayne and enemies are cast in shadow.  It’s easy to appreciate what the designers were trying to accomplish, but it adds a frustrating level difficulty as the enemies are essentially rendered invisible as they blend into the background and can be covered by the foreground.  It’s like fighting blind and is just as much fun as it sounds like.


Another note of disappointment is the lack of enemy models.  There are only a handful of enemy types encountered through the entirety of the game and after reaching the halfway point, they’ve all been revealed.  Not only is it tedious to fight the same enemies over and over again, there’s nothing visually appealing to look at.  It just serves as a way to quickly identify the enemy type and adjust the strategy needed.


And strategy plays the largest role in Betrayal.  This is a brutally difficult game, on par with many of the early classics like Ghosts n’ Goblins and modern gauntlets like Ninja Gaiden.  Laid out in 15 stages, the gameplay breaks down into navigating maddeningly difficult platforming sections interlaced with rooms populated by hordes of enemies.  Interspersed are check points where Rayne revives after each failed attempt at a challenge.  The game is designed in a way that there’s usually only one way to clear any challenge.  The difficulty is finding that way through trial and error. 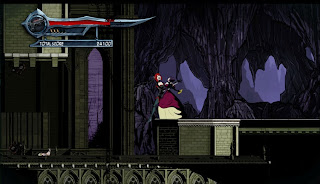 The trick is realizing that Betrayal operates in its own universe with its own rules.  Things like Rayne being temporarily invincible when changing to and from bird form are essential to survival.  Knowing that Rayne takes a half step when stopping is critical to navigating the precision focused platforming.  If a player tries to get through the game by what they understand to be “normal” rules, it will be nearly impossible to finish.  Learning the different rules of the game and using them against it are the best way to win.  Even then, it can be an exercise in frustration due to the sheer difficulty each level presents.


Clearing the multitude of challenges requires complete concentration.  Because of this, it became necessary at times to turn off the background music.  The soundtrack is mainly comprised of rock opera with wailing guitar solos.  What makes it unbearable is that the tracks start from the beginning each time Rayne dies.  And she will die a lot on any given level.  This means players will hear the same opening notes and riffs repeatedly.  At times it is unbearable, so muting the music is a must when it comes to crunch time.


Rayne’s arsenal is as beautifully simple as the visuals.  With her twin blades and a series of kicks, the majority of combat is up close and personal.  Combined with a strong array of aerial combat maneuvers, Rayne is equally adept in the air as she is on the ground.  Rayne also has a pistol with a number of shots available.  The pistol can take out most enemies with one shot and ammo can be retrieved from some fallen enemies.


It’s hard to say that Bloodrayne: Betrayal is a fun game due to the level of difficulty.  Each level gets progressively harder and it can take upwards of an hour when trying to clear a level the first time around.  For those that appreciate a challenge, Betrayal is definitely a must.  For more casual gamers, it’s harder to recommend.  There are only two reactions that can come from reaching the end; “Thank the maker it’s over.” or “That was awesome!  I’ve never been pushed that hard!”  Knowing one’s limits is advised before buying.
Game Reviews