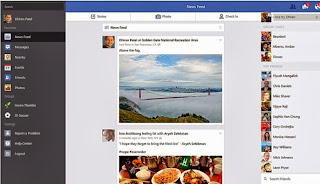 The one glaring omission from the Windows 8 app store has always been Facebook.  It's a service with so many users that itself is tied into so many other services.  Until this co-release with Windows 8.1, Windows 8 users had to either trust third party apps or resort to using the actual site.
The Windows 8 app shares a similar design to the Windows Phone app, which itself bears a strong resemblance to the apps on the Android and iOS platforms.  That's all thanks to the uniform design from Facebook.
So if you've used the Facebook app for mobile platforms, you'll be familiar with their latest release.  Because desktop users will probably still use the actual site, I don't know how necessary the app actually is as it doesn't provide any additional functions.  While the same can be said of Windows RT devices, since RT is only available on tablets, the touch centric design definitely favors the app over the site.  Either way, the app is finally available so Windows users can stop their belly-aching.﻿