App of the Week: Reaper 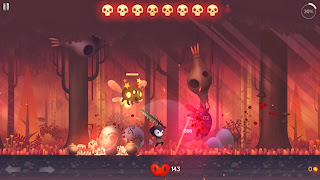 When purchasing a game for either my phone or tablet, I'm hesitant to purchase games without the Xbox Live moniker.  For reasons I'm not entirely proud of, I like getting the achievement points that come along with playing an Xbox Live game.  But as I perused for something to kill my already non-existent free time, Reaper's intriguing art style caught my eye.

It's no secret that I'm a fan of good looking games.  While I firmly believe graphics do not define a game, they certainly don't hurt.  The art is cartoonish and simple, evoking memories of Samurai Jack and even a hint of Yogi Bear,  There's an incredible amount of detail on everything from the characters to the animations and backgrounds.  This amount of well crafted design helps the world to come alive and provides much appreciated stimulation for the eye as the tiny reaper cuts through his foes.  The color palette is varied and each zone is themed perfectly from the autumn-like forests to the teal tinted caverns.

Animations are fluid and the multiple moving parts are never out of sync.  Everything seems truly alive as they bounce, run, and fly across the screen.  From the howling screamers leaping through the air to the delightfully cartoony bears looking to turn the reaper into their next snack.

The story follows a pale faced swordsman who acts as a mercenary.  This embodiment of death reminded me of another pale swordsman, Vampire Hunter D.  The land has long been inhabited by the multiple tribes of the wild.  Wearing wooden masks and wielding terrible magic, they've lead relatively simple, peaceful lives.  Then the might of the imperial army arrived to harvest the natural fluid deep within the earth and colonize the native tribes, through force if need be.  But as they harvest more of this fluid to power their war machines, it gives more magical power to the tribes.  Enter the reaper who does odd jobs for both factions, working for the highest bidder.

The quests are well written and I really enjoyed the multiple paths a conversation could take.  There were times I could choose to be benevolent and others where I could beat up a quest giver to get more reward money.  Much like the detail in the visuals, this attention to the dialogue makes the characters inhabiting this world feel alive.

There's an overworld map with points of interest like camps, stores, and caverns.  Progressing through the story unlocks more points which open more quests.  There are also random encounters while moving from point to point like in Final Fantasy titles.

Each mission usually breaks down to attacking or defending a point.  Once at that point a new screen appears where players control the reaper and must kill all enemies before they can exit.  There's a progress marker in the top right corner of the screen which shows how far into the fight a player is.

Controls are fairly simple and work well, for the most part.  In the lower left hand corner are two arrows to move the reaper left and right.  Moving him into enemies will trigger an auto-attack.  Tapping the screen will make him jump and there is a double jump available.  Double tapping the screen while in the air will trigger a whirlwind attack.  Swiping down or up also trigger special attacks.  Landing regular attacks add to the rage meter.  This meter is used to power the special attacks.  Special attacks can be used with an empty rage meter, but do considerably less damage.

As the game progresses, it gradually gets more difficult as games tend to.  It's not long before the screen is flooded with enemies.  While Reaper is an action game at its heart, there's a fair bit of strategy in each fight.  Do you take out the fliers or walkers first?  Should you eliminate the weaker enemies first or get the tougher foes out of the way?  With both magic and bullets flying all around, special awareness is key.  And since most projectiles will track, it's another game entirely of dodging enemies, their projectiles, and environmental hazards while trying to slay the horde of enemies in each level.

The only problem I had with the controls was that the pause button, despite being in the top left corner, seems to extend all the way down the screen.  So if I was even a centimeter off one of the movement arrows, it would pause the game.  It happens frequently in the heat of battle and often leads me to take a few hits.

After each battle or quest completion, the reaper gains experience and gold.  As he levels up, players can pick one of three attributes to improve.  They change with each level and can be anything from a health increase to improved blocking ability.  These affect his stats like any other RPG and gear can be purchased from stores for the same effect.

Reaper is a very well built game and incredibly polished, especially for a mobile title.  It was a very pleasant surprise.  More surprising was its availability on all platforms.  Not too many titles have this type of wide spread availability.  It's free to play up to level 10.  After that, players can upgrade to one of three full versions.  The entry level just unlocks the game while the additional tiers add a type of survival mode and extra in-game items.  Reaper is an enchanting title that nearly anyone can enjoy.  You'd do well to add it to your collection.
App of the Week