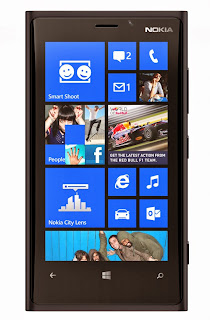 Recently, as misfortune loves me, I had the pleasure of figuring out why my Nokia Lumia 920 screen would turn black when receiving a text or phone call.  Anytime a text is received on Windows Phone, it displays along the top of the screen in a toast notification.  This notification also displays on the lock screen.

While I would hear the chime that a text had been received, the screen would be dark until I turned it on and unlocked it.  Days later, the problem escalated and began affecting incoming and outbound calls.  I could dial and answer fine, but the screen would go black immediately afterwards.  This prevented me from getting back into the phone until the call was over.

As it turns out, this issue is related to a larger problem with the once-flagship Windows Phone.  The Lumia 920 has a notorious problem of dust getting in the front of the phone through a small space just above the camera.  The dust embeds itself in the front facing camera.  I never used the front facing camera, so I never thought it was a big deal.  However, if the dust accumulates too much, it screws up the proximity sensor.  This makes the phone think it's being held up to the user's ear which turns the screen off.

It's easy enough to blow the dust out with a can of compressed air, but it is an ongoing struggle.  Nokia has since fixed the issue with a sheath on all future models.  Nokia has also stated that existing users can take their phone to a Nokia Care Point Center to have the sheath put on.