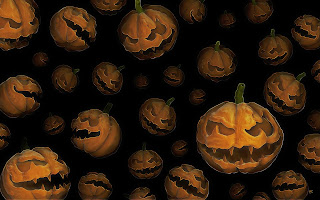 When the leaves turned and began their slow deathly descent to the ground, that is when they came.  Through the rolling mists and under the encompassing cover of night they came.  We knew not whence they came or their purpose.  We only knew to barricade the doors with strong oaken boards and light the jack-o-lanterns.  Those who failed to heed the warnings would be drug from their homes with horrified wails of unearthly terror.  Terrible talons and gnashing teeth would tear at their flesh and rend it from bone while we listened on.

That is where the tradition began.  Those who carved the pumpkins with ancient runes and lit them with the fire of our ancestors were safe.  For hundreds of years we had lived like this.  Beyond this one awful night we lead ordinary, pleasant lives.  But this night always came.  It always returned like a bad dream, wrapping up the village in its brutal embrace.

In the week prior, we had carved our ancestral runes into the pumpkin.  It was something that always brought the family together.  It had to, lest we be torn apart by our communal failure.  As the sun set beyond the towering trees bordering our quiet hamlet, we put the jack-o-lanterns in front of our door and lit it with the hearth’s fire.  They glowed brightly in the night and bolstered our spirits.  They had protected us for years and this year would be no different.

When dusk had finally blanketed the countryside and the final iron nails hammered into the boards covering the door, we huddled together in the living room.  Our faces were fixed on the door in anticipation.  The glowing embers of the dying fire illuminated our cowering forms and cast perverse shadows on the wall.
Outside we could hear the rustling of the dead leaves as they danced in the chill wind.  They rattled like tiny bones as they blew across the rooftop.  The normal sounds of the forest surrounding our home had subsided before we had realized it.  There was an ominous silence as I could see my feelings of terror reflected in my family’s faces.

Through a crack in the heavy curtains covering the front window, I could see the soft and reassuring glow of our jack-o-lantern.  I closed my eyes for only a moment.  When I opened them, the light was gone.  My sister had seen the same event transpire and I could hear her soft whimpering.  Father shushed her while keeping his wide pale eyes fixed on the door.  A light sheen of sweat covered his brow and the back of his neck.

The silence was the worst.  The silence was the worst until an earth-shattering boom rattled the door on its hinges.  My sister screamed as my mother wrapped her tightly in her arms.  My father stood abruptly and readied his rifle.  With a stern look, a dark aura of concentration came upon him.  His eyes never left the sights placed on our front door.  For all his preparation, it did us no good.

The heavy door began to shake violently as they beat their bodies into it over and over.  The nails groaned against their housing in the oaken boards and I could hear splintering.  The tremors rang in my ears as my sister’s wails accompanied them in a tumultuous torrent of sound.  The embers had been all but extinguished by now and that dreaded dark now permeated every inch of our home.  I suppose it was for the best.
As their bodies continued to hammer the portal to our home, their persistence finally paid off.  The door buckled and crashed onto the floor in a shower of splinters.  Their horrible screams rang out with a blood-curdling ferocity.  My father only got a shot off before they tore into him.  I closed my eyes like a coward.  I could feel my family’s warm blood splash against my face and suddenly…suddenly I was cold.

I roam the barren halls of my family home now.  Time has stopped its uncaring march forward.  I can only stare and scream in silence as time wears my home into nothing.  There is nothing and no one to hear my terrified cries.  My family is gone, torn violently from this world, leaving me behind.  And now I slumber in this eternal darkness with no light to comfort me.
Short Stories