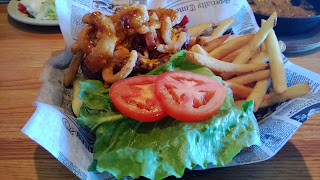 Verdict:
To be honest, I've had this burger twice now.  The first was as leftovers.  It was very good as the bourbon sauce had marinated the beef overnight, soaking into every nook and cranny.  The fried onion strings had gone limp and added nice contrast to the saucy burger.  It was probably one of the best re-heated burgers I've ever had.

When it came time to eat the fresh burger, it was another story.  The construction was the same, but instead of a soft, flavorful burger, the fresh Bourbon Street was very dry.  This is something I've noticed with the burgers at Lucky Star.  The meat is drier than most and there is little to no seasoning.  The dryness of the burger stood in stark contrast to the meager helping of bourbon sauce on top of the trimmings.

The closest comparison I can draw is to Friday's Jack Daniels burger.  The recipe is similar, but there's one crucial difference.  If Lucky Star allowed the burger to marinate in the sauce instead of lightly topping it, the burger would improve dramatically.  This was proven to me by having the burger as leftovers.

Overall, the Bourbon Street isn't terrible, but what hurts it most is how easily it could be improved.

On the side:
A hearty helping of somewhat soggy fries.