App of the Week: Asphalt 7: Heat 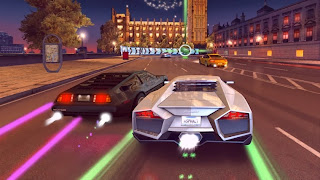 Racing games are a staple on the mobile market.  The bevy of sensors included in the thin portable devices almost makes them ideal for the genre.  Add in the natural ability to "steer" the device by turning it like one would an actual steering wheel and you can check off another box in the immersion category.

Asphalt 7: Heat was one of the first racing titles available for Windows 8 that caught my eye.  Granted the game has been available on other platforms for some time now, but that doesn't make it any less fun to play on Microsoft's latest OS.  Especially if that OS is running on a tablet.

Visually speaking, Asphalt 7 is a striking game.  I'm floored at the incredible quality of the graphics and that there's no dip in framerate or any pop-in.  There's a great deal of detail in the car models themselves and enough in the environment to make it engaging while barreling through the streets.  The visuals are on a level that I wasn't expecting my tablet to deliver.

The maps themselves offer a good deal of variety so as not to feel repetitive.  There are plenty of paths to chose on some maps with shortcuts cleverly placed to give players an edge while racing.

Cars and races are broken up into categories so you won't be racing a Mini Cooper against a Ferrari.  While it makes sense, it's still disappointing that I can't exclusively drive a Viper in every race.  To progress, mini circuits of several races must be completed which award money and stars for completing side objectives within each race.  As stars and money are accrued, players unlock new cars and upgrades.  There's a bit of a grind involved, but it's not terrible.  It's just enough to keep players coming back for another race.

The handling is very sensitive.  At least it was on my Asus Vivo Tab RT.  I would find myself over-steering in a vain attempt to counteract what I had just done.  It took some time, but I eventually found my rhythm of short, smooth movements that seemed to work.  It's a bit frustrating at first, but works itself out with practice.

For $1.99, it's hard to beat the price for such a high quality game.  The visuals are astounding for a mobile title and the quick nature of the frantic races make it a game easily played in short bursts.  The long term investment of repeating races for more stars and cash eventually pays off once better cars and upgrades are finally unlocked.  And once the single player portion is complete, there's always multiplayer to keep players entertained.  All in all, Asphalt 7: Heat is a package as slick as its visuals.
App of the Week