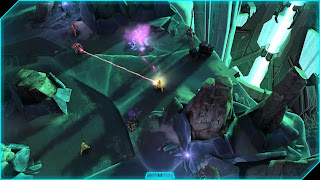 It was only a matter of time before a Halo title found its way to the new mobile Windows platforms.  And it's a hell of an entry.  Much like Infinity Blade did for iOS, Halo: Spartan Assault has raised the bar for mobile games on Windows.

Acting as a training simulation withing the newly created Spartan Ops program aboard the UNSC Infinity, Spartan Assault chronicles the events of Spartan Davis and Spartan Commander, Sarah Palmer.  The story is spread across six operations containing five missions each.  A rogue group of covenant have broken the peace treaty brokered at the end of Halo 3 and have unleashed hell on another planet containing Forerunner technology.  It's not the most original story, but hits all of the bullet points necessary for a Halo game.  It's enough to keep the game moving along, but skipping the beautiful drawn cutscenes and pre-mission text won't detract from the overall experience.  It's kind of hard to do that when each mission breaks down to killing alien by whatever means necessary.

And that's truly the strongest aspect of Spartan Assault.  Much like Halo 4, there's a load-out that can be customized before each mission.  The customization is fairly limited as weapons are preset for each mission and the primary weapon can only be swapped out if the player has accrued enough experience from previous missions.  The new weapon will only be available for the next mission unless purchased again.  But each gun consumes ammunition with gluttonous glee, so expect to scavenge for weapons frequently.

All of the favorites from the series are there and in strong showing.  Each performs as it always has except of course for sniper rifles.  While they still pack a punch, there's no way to sight up an enemy and pull off a satisfying headshot.

Played from a top-down perspective, the Spartans are moved with a virtual joystick on the left and guns fired in any direction with a right virtual joystick.  With this control scheme, Spartan Assault plays like a classic top-down shooter.  However, the controls are so responsive and silky smooth, that it's hard to believe it's being played on a touch device.  Despite support keyboard and mouse and even the Xbox 360 controller, Spartan Assault handles beautifully with the virtual controls.  The rest of the controls are spread along the bottom and right hand sides of the screen in a clear, easy to access fashion.  The simple layout combined with the highly responsive controls puts Spartan Assault at the top of the mountain as far as mobile controls are concerned.  It's simply unbelievable how quickly and natural it felt to circle strafe targets and not have any rogue shots.

Graphics are as good as can be expected for a title like this.  Everything looks as it should, from weapons and effects to character models and environments.  It's not astounding like Infinity Blade, but it's no slouch either.  And for being a game capable of running on Windows Phone and Windows RT, it's extremely good looking.

Since its release, an additional operation has been added, Hydra, which tacks on five new missions.  Missions can be completed in a few minutes which makes this a perfect title for on the go gaming.  And for a title to be so well polished and have such compelling gameplay, the low price is all the more enticing.  For those still on the fence, there's a free "Lite" version which gives a taste of the story and the first level of play.  But I can almost guarantee that anyone who gives it a try will immediately buy the full version.
App of the Week