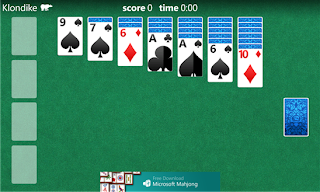 What's this!?  The Solitaire Collection again?  Well, yes...and no.  This time, the collection of popular games (Klondike, FreeCell, Spider, TriPeaks, and Pyramid) have come to the phone.  For the most part everything plays the same with only some minor differences.  And unfortunately, all of those differences are horrible.

First and foremost, the game is poorly optimized for the platform.  A single game of Klondike made my Nokia Lumia 920 uncomfortably warm.  Even if I just grasped the edges with my fingers, I could feel the heat radiating off the back of the phone.  And because the CPU is being worked so hard, the battery drains rapidly.  There are reports that it will even drain the battery with the phone plugged in.  There's simply no excuse for that.

The other big draw is the advertisements.  Yes, I understand it's a free game, but so was the desktop client.  And that version would only have ads between games when displaying stats.  Now, the ads will not go away.  They're locked at the bottom of the screen and more often than not, are ads for other Microsoft titles like Mahjong and Minesweeper.  Now it's fine that you've put an app out for free and you want to advertise your other free games, but the way it's implemented in this app is quite distracting.

My biggest personal gripe is the hidden UI.  To change the settings for a games (ex. draw three to draw one, etc.), you have to tap the lower right hand corner of the screen to bring up the settings.  There is no indicator that is where the settings are.  The only other settings menu is on the home screen for the app and it's just general settings like volume control.  It's hidden UI elements like this that turned people off to Windows 8.  There's absolutely no need for it here.  The fact that I found it completely by accident is a terrible design choice.

The last minor gripe is that themes can't be customized.  It's not a huge deal, but I was a big fan of that inclusion for the desktop version.  And since the phone client is capable of syncing with cloud saved games for the desktop, why not themes used on the desktop?

Overall, this is a terrible offering from Microsoft.  There are other, better versions of these games available on the Marketplace.  Do yourself a favor and avoid it until they decide to patch such issues as the battery and CPU usage.