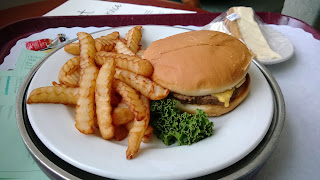 Verdict:
While waiting for my son's birth and helping Kim through the labor pains that accompany that, a perverse idea struck me.  I'm going to have to order lunch.  They have burgers here.  I write reviews about the burgers I've eaten on my site!  I should review another hospital's burger!

And so my order was placed.  And I waited.  And waited some more.  An hour later, my "Dad Tray" finally came and the smell of the plastic warming cover combined with the overly processed food assailed my senses, causing flashbacks of the kitchen I had worked in over a decade ago.  I guess some things never change.

And indeed they don't.  The burger was exactly as I had remembered it.  The bland patty had just enough meat in it to be called a hamburger as it sat between two of the lowest grade bun halves.  While it wasn't horrible, it was just so basic and disheartening.  This burger was the calculated result of research whose sole aim was to determine, "just how little do we have to produce to make an edible product and call it a hamburger?"

On the Side:
Crinkle cut fries that were soggier than a sauna towel