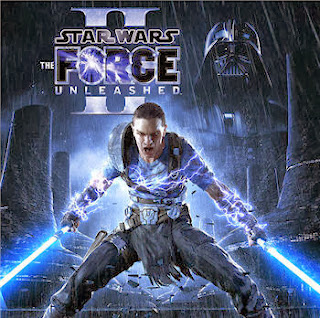 The Force Unleashed was met with generally positive reception from both fans and critics alike despite noted repetition in enemies and levels.  And after what seemed like a death of protagonist, Starkiller, at the end of the game, many were left wondering what route a sequel could take.  Two years later, everyone got their answer with The Force Unleashed II.

Clones.  The answer is clones.  Starkiller really did die at the end of the first game, giving everything so the Rebel Alliance could form.  Roughly six months after the end of the first game and just before Episode IV, players find that Vader has been up to his yellow eyeballs in cloning another secret apprentice on Kamino.  After going through countless clones, we meet this latest one who has failed yet another one of Vader’s tests when he refuses to kill an assassin droid with the guise of Starkiller’s main squeeze, Juno Eclipse.

As he’s set to be executed, Clone Starkiller breaks free from the cloning facility and makes his way off-world chasing the memories of the original Starkiller.  Along the way he runs into the original’s former allies, General Kota and Bail Organa.  Throw in a completely forced cameo from Yoda and a pointless vision quest in the same cave Luke will later journey through and it’s clear that the game is primarily pointless fan service.  There’s very little substance to the game and even when compared to the first, it falls short.  Neither game feels essential to the canon of the series.  Rather than focus on a compelling and unique story that could have been brilliant like the Expanded Universe, it was decided to make as many unnecessary ties to major merchandising points as possible.  So Boba Fett and Yoda were shoehorned into the story.  Both could be removed with little to no detriment to the overall story. 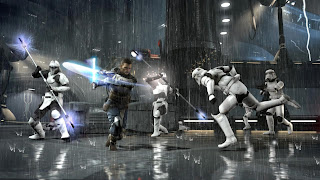 A large problem with the first game was repetition.  There wasn’t much variety to enemies and the second half of the game had Starkiller running through the exact same locations as the first half.  The Force Unleashed II follows in those same footsteps for the same terrible effect.  Throw in more quicktime events for finishing moves on bosses which never change and it starts to get old fast.

It doesn’t help that from the Starkiller feels a bit overpowered.  Granted, he’s supposed to be incredibly powerful, but from the first level the only challenge is the amount of enemies thrown at him.  But there’s no variety to the fights.  Each enemy must be taken down in the manner unique to them, which is never more than one.  So each forced fight in the painfully guided levels is just an echo of the last.  It would have been nice if there were several different ways to tackle a fight, but there just aren’t.  And each breaks down to forcing your way through.  There is no finesse required and any real style isn’t rewarded.  And when you’re spamming the same moves repeatedly and winning, there’s no need to try anything else and thus the other skills available and the “skill tree” becomes completely irrelevant.

The game looks and sounds like Star Wars, but much like many of the cash grabs the series has been making of late, the whole thing feels hollow.  The cutscenes are absolutely astounding and the amount of detail is incredible.  The much touted Havok and Digital Molecular Matter engines are put to great use as nearly everything is destructible in the game.  Enemies can be cut apart in nearly any manner and their bodies react accordingly when interacting with the environment.  No game outside of The Force Unleashed series captures the raw power of the Jedi.  The body of the game is solid, it just lacks soul. In the end, that’s all The Force Unleashed II is.  There are some new environments and two lightsabers, but not much more.  The story is forgettable and there’s no deviation from the design choices that were so heavily criticized in the first game.  This game could have been so much more, and it’s indicative of what is wrong with the franchise as a whole.  It’s become a lazy cash-in of the name and that’s just not enough.
Game Reviews