The Gods of Smite: Thanatos 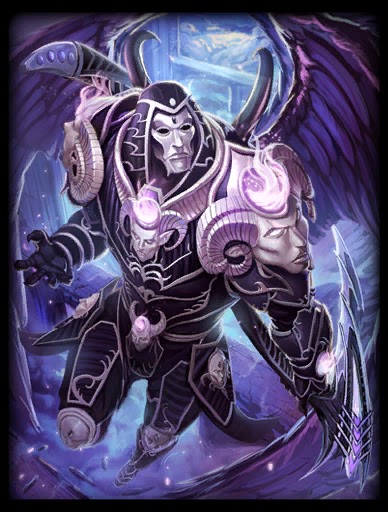 Every culture has their own embodiment of death.  Anubis and Osiris filled this role jointly for the ancient Egyptians.  Hel and Freya took on similar roles in Norse mythology.  Even today, we have the Grim Reaper with his black cloak and scythe.  But in the times of the ancient Greeks, one deity alone claimed the lives of the fallen, Thanatos.

While Thanatos is a fearsome individual, he rarely appeared in Greek mythology.  The son of Nyx and Erebos, Thanatos had multiple siblings whom were also embodiments of all things negative.  Despite being the physical embodiment of death and full of hate towards all beings, Thanatos has been outwitted on occasion.  But things didn’t end well for that individual and to this day Sisyphus is still rolling that boulder.

Thanatos fills the role of an assassin in Smite.  He is able to move swiftly about the battlefield and just as quickly eliminate players who fail to tread carefully.  Even prepared players can have a hard time fending off Death itself as his attacks are among the most powerful in the game.  His passive ability, Harvester of Souls, allows Thanatos to see enemy gods that are low enough on health to be killed by his ultimate ability, Hovering Death.  Killing an enemy also rewards Thanatos with health based on the maximum amount of HP his enemy had.  Enemy gods yield 20% while minions only yield half that.

Even though he is primarily a melee fighter, Thanatos has the ability to throw his scythe at enemies.  The attack deals an incredible amount of damage, slows the victim, and heals Thanatos for 50% of the damage dealt.  The only drawbacks are that it doesn’t hit multiple targets and takes 5% of Thanatos’ health with each use.  But, the potential life gain with the attack outweighs the cost of life needed.

The one real disadvantage to using Thanatos is his low amount of HP.  If played well, he is a valuable asset to any team and an enemy to be feared in any encounter.  But novices can expect to be punished repeatedly for any mistake as it is easy to eliminate him with several powerful attacks.  Fortunately he has the ability, Scent of Death, which grants him immunity to and removes any slowing effects.  His speed increases and actually doubles when moving in on a god that can be killed by Hovering Death.

When he’s in close, Thanatos can use Soul Reap which deals fearsome damage and silences all enemies hit.  Again, there’s a drawback to this ability with a reduced swinging rate and another 5% of his life consumed.  However, the ability to silence enemies is absolutely devastating and typically leaves enemy gods running and leaving them ripe for the taking.

Hovering Death is Thanatos’ most impressive ability and is his ultimate attack.  Soaring into the air, Thanatos can move about the map at twice his normal speed and come crashing back to the earth with great force.  Enemies below a certain percentage (depending on the level of the skill) are instantly killed while all others are stunned.  This ability uses 10% of his max health, but his passive ability will transfer 20% of the fallen foe’s health to Thanatos.

Thanatos is a terrific addition to the Smite pantheon and it’s not uncommon to see him in nearly every match.  Despite having an absurdly low amount of health, his raw offensive power balances him out and makes him a force to be reckoned with.
Game Reviews