The Gods of Smite: Aphrodite 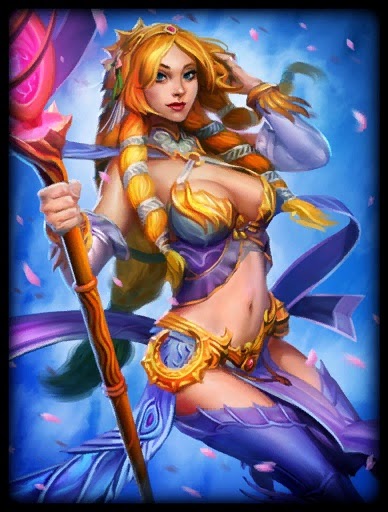 Of all the gods and goddesses battling in Smite, few seem as out of place as Aphrodite.  Emerging as a fully grown woman from the sea, Aphrodite was instantly desired be all.  To prevent the gods from quarreling over her affections, Zeus decreed that she marry the smith of the gods, Hephaestus.  The humorless, even tempered god known for his hideous appearance would not draw the ire of the others for possessing the rapturous Aphrodite.  However, this didn't prevent Aphrodite from seeking the affection of many gods and mortals alike.  More than any other, Aphrodite was responsible for the Trojan War due to her tampering with Paris’ affection for Helen.

So why is a goddess renown for being a lover entering a war amongst the gods?  Apparently she’s keeping her allies alive through the power of love itself.  Unlike many of the others, Aphrodite’s abilities require pairing with another god for full effect.  She fills the support role like no other and is a great addition to any team.

Her passive ability, Loving Embrace, grants 30% of all mana gained by Aphrodite to her soul mate.  Kiss is Aphrodite’s first ability and arguably her most important one.  By blowing a kiss to a friendly god, the two become soul mates.  Linked by an ethereal band, both Aphrodite and her soul mate move at an increased rate.  Blowing a kiss to an enemy god stuns them and increases damage by Aphrodite’s soul mate for eight seconds.  Kiss should be the first skill purchased as every other ability relies on it.  The dual purpose of stunning and buffing attack power is only more reason to invest in it right away.


Aphrodite only has two attacks besides her default.  The first, Back Off!, deploys a large AoE from not only Aphrodite, but her soul mate as well.  The attack deals a moderate amount of damage, and knocks back any enemy 25’.  If an enemy were to be hit by both blasts, they’ll only be affected the one originating from Aphrodite.  Back Off! is fantastic for assists or getting a pursuing god off Aphrodite’s tail.

The second attack ability is Love Birds.  Summoning a flock of doves to attack in a path before her, the doves will apply a DoT effect for three seconds.  Making Love Birds nearly as important as Kiss is the dual effect of it healing both Aphrodite and her soul mate.  Being able to reliably heal is what makes Aphrodite so invaluable to any team.  As such, Love Birds is the first ability that should be fully upgraded.

Aphrodite’s ultimate ability is Undying Love.  By pledging herself to her soul mate, they and Aphrodite are made invulnerable to all damage and crowd control effects for up to two seconds.  This makes rushing towers, phoenixes, and titans a hair easier.  It also makes getting away more plausible.  When timed correctly, it can completely negate the effects of other gods’ ultimate attacks.  Used in conjunction with Back Off! and there’s the possibility of walking away from team battles without a scratch.

Aphrodite is one of the few dedicated “healer” characters in Smite.  But her abilities make her arguably the best in the game at what she does.  She pairs incredibly well with any guardian or DPS class.  Aphrodite should never be used on her own and this is clear as half of her abilities won’t function to their full potential without a partner.  When looking at the grand scheme of things, Aphrodite doesn't seem so out of place in a war amongst gods.