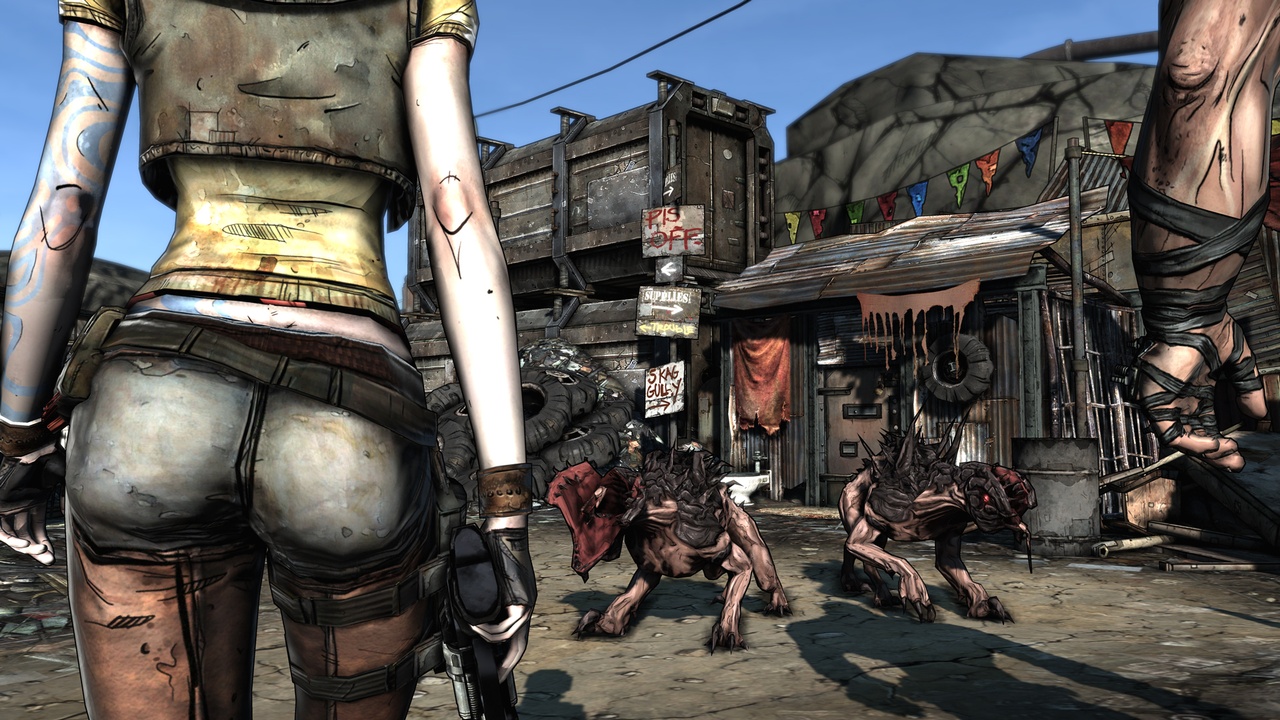 With Borderlands: The Pre-Sequel set to be released later this October, publisher 2K Games has offered the previous two installments at ludicrously low rates on Steam.  Currently, both game of the year editions can be had for a paltry total of $17.  This includes both core games and all available DLC.  It's an incredibly good deal for a pair of games that breathed fresh air into the stagnating FPS genre.


This puts me in a unique situation.  I'm currently playing through the first game with someone who had never played either title.  So while we play through the first game together, I'm tackling the second game on my own in an effort to get to the DLC I hadn't played previously.  Before this, I had purchased and played both games when they were released in 2009 and 2012 respectively.  Now that I'm playing through both games at the same time, I'm noticing all the little and not-so-little changes that took place.

My initial thoughts on Borderlands 2 haven't changed much.  The core mechanics are still the same, but the biggest detractor is the writing.  The humor is juvenile at best.  From 'boner farts' to 'Butt Stallion', it's a poor attempt at recapturing the magic of the original.

While Borderlands didn't have much in the way of character development, players knew who each character was, their motivations, and tapped into the pervasive sense of humor the game had to offer.  It wasn't much, but it was enough to set the tone of the game.

Borderlands 2 was far more ambitious with its story-telling.  We found out a great deal more about the vault hunters and what had happened to them since the events of the last game.  There was a love story, friends lost, and allegiances severed.  But it felt like all of this was shoved into the back seat while atrocious humor did its absolute best to drive everything off a cliff.  The humor and magic of the first entry was a little more subdued whereas the second wanted to throw as many immature jokes as it could in players' faces.  The entire time I felt that Borderlands 2 was trying too hard to surpass Borderlands instead of letting the humor flow naturally out of the story and character interaction.

The most noticeable difference is in how much cleaner Borderlands 2 looks.  Everything is smoother and more polished.  From characters to environments to the weapons, everything is sleeker.  While Borderlands had players running across a desert and through mountainous scrap yards, Borderlands 2 offered a much greater variety of environments.  Coupled with a heavier hand on futuristic technology and weapons versus the Mad Max/Firefly inspired designs of the first game, Borderlands 2 is definitely easier on the eyes.

But while it is prettier, there are some changes to the gameplay that make me yearn for the mechanics of the original.  First and foremost, the menus are laid out in such a way that not all of the information for a particular tab is displayed in a clean and easy to read manner.  The most obvious example of this is the talent trees.  In the first game, all three talent trees were displayed at once, which made it easy to pick the initial path and compare perks across all three.  Borderlands 2 opts to hide two of the talent trees while the selected one takes up residence at the front of the screen.  The overall impression of the UI within the second game is that it is cluttered.

Another minor gripe was that the compass had been removed.  It was replaced by a mini-map which simply doesn't cut it.  The compass made it especially easy to track locations of current objectives and the placement of enemies.  Its location at the bottom of the screen along the experience bar was ideal because it was easy enough to keep it in peripheral vision and not be distracted while driving or shooting.

With all of this information in a mini-map in a corner of the screen, I found myself having to look away from what was happening in front of me far too often.  And when it came to driving from point A to point B, I had to stop far too often in order to look at the full map and find my way.

I will say that one major improvement in the sequel was the ability to pick up items like cash, ammo, and health just by walking over them.  Having to manually pick up items gets to be tedious and is that much more of a hassle in the middle of a fight.

My complaints are just that, my complaints.  With a few years having passed and my latest foray into both games reaffirming my initial thoughts, I still prefer the first game.  While the second is by no means terrible, the little changes in addition to the horrendous comedy definitely put in in the shadow of its predecessor.  Here's hoping that the third entry can rectify some of that.
Articles