Over the past few years, I've found myself getting pulled deeper into the tower defense genre.  This is largely thanks to its abundance on the mobile platforms that seemingly everyone has with them.  Throw in some pretty lights like those found in geoDefense and riotous gameplay and I can easily kiss the next half hour goodbye.


But for the most part, tower defense games are all the same.  You plot a path for the invaders to swarm through and litter it with turrets and AoE items in order to stop them from destroying your base.  No matter how fun/frustrating this is, eventually the novelty will wear thin.  How does one spice things up?

Lucky for you and me, Coffee Stain Studios has found the answer.  No, it's not Goat Simulator.  Stop looking at that.  The answer is adding another dimension to the already frantic gameplay.  Sanctum 2 puts players in the thick of the action by beautifully marrying tower defense and FPS.

Each level is broken up into a series of waves.  Between waves, players have the opportunity to build walls and spend money on placing and upgrading turrets.  Once the design is laid out or the timer runs out, it is locked for the next wave and cannot be modified.  This is where the FPS element is most helpful.  Didn't reinforce a section strong enough?  Left a gap that creates a shortcut?  Not a problem.  Turn yourself into a human wall of death that waves of enemies crash upon.

Not only do players have to build funnels and lanes and turrets, they must contend with the horde themselves.  This addition only makes too much sense.  Players can bolster their own larger design and get their hands dirty as seemingly unending swarms seek to exploit every flaw.

Not stopping there, Coffee Stain Studios took things a step further and made Sanctum 2 a four player co-op shooter.  More players equals more guns equals more enemies equals more fun.  But this also means that there are four players vying to play architect.  Add in the complication of resources not always being distributed equally with every planning stage and suddenly players are being forced to cooperate in order to survive and win.  Sanctum 2 breeds team work. 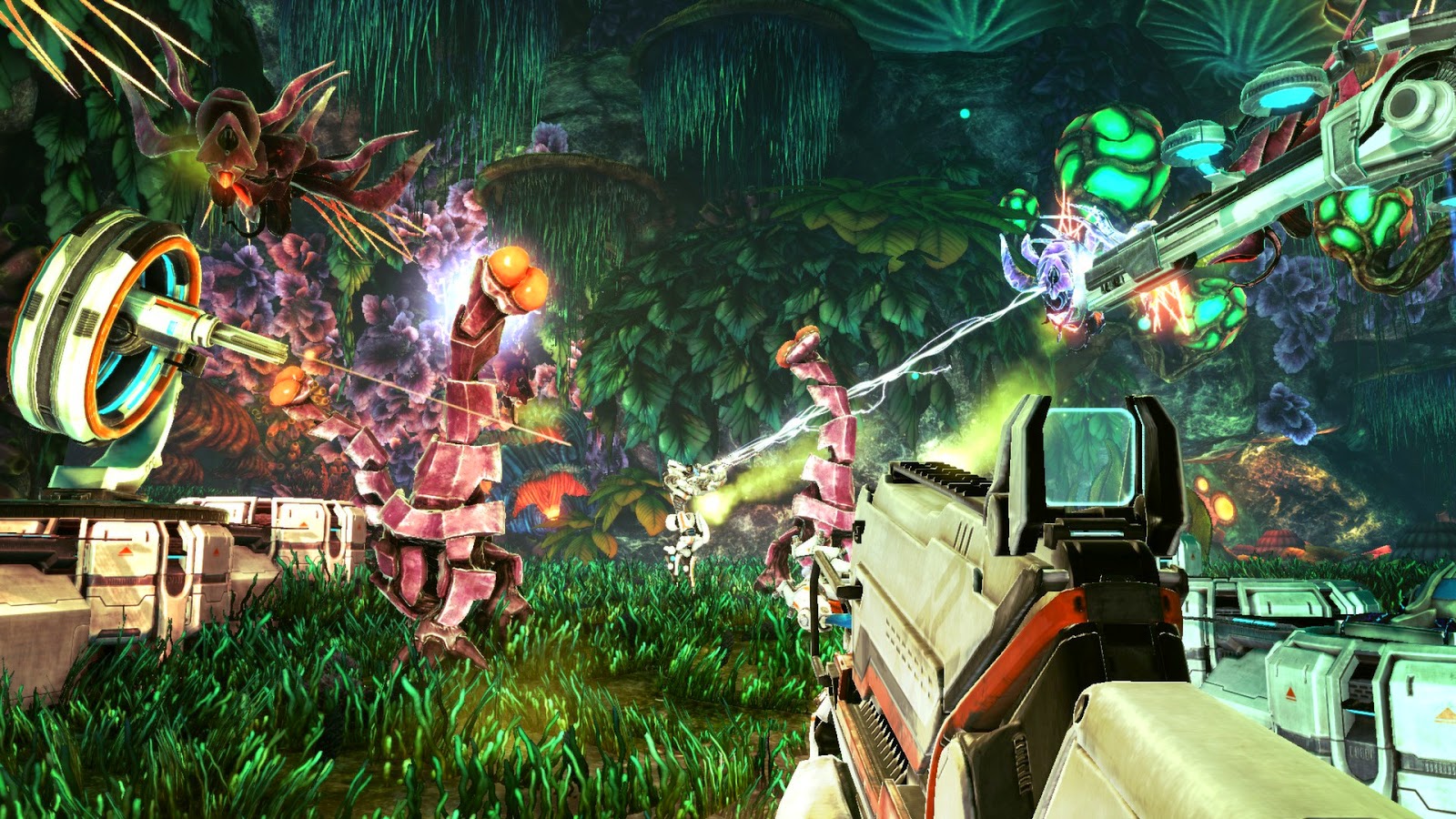 The story is broken up into sections consisting of four areas each.  After clearing a section, a short comic-style panel will play out, moving the story forward.  While I'm only halfway through the game, the story isn't terribly gripping thus far.  The art is lively and fun to look at, but the focus is clearly on shooting the various enemies.

Players can choose from one of five characters.  Each carries a unique primary weapon that cannot be changed.  As they level up, they can be equipped with a multitude of secondary weapons, perks that alter how they play, and different tower types to be deployed.  The characters themselves are full of life and will constantly quip about their current situation.  Between you and I though, we know the best character is SiMo.  What's not to love about a hulking robot with tiny feet wielding a sniper rifle and saying it's time for coffee?

I still have a long way to go, but thus far have been nothing but impressed with the otherwise unassuming title.  I highly recommend it to anyone with even a passing interest in either the FPS or tower defense genres.