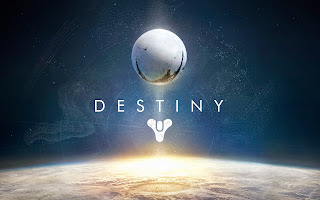 After much waiting, and a very enticing price drop, I’ve finally acquired Destiny. Granted, it was for Xbox 360, so I’m not getting it in all its glory. But it’s hard to justify the cost of a new console for one game.  Unless that game is Bloodborne. But I digress.

Thus far, I’m only level 14 on my titan and have just opened up Mars. The reason I finally bought the game was solely due to the demo that’s available on Xbox Live. There was something refreshing about it.  From the quirkiness of Ghost to the way the Fallen induce fear into me, it served as a great break from MMOs. The combat was spot on and I needed something beyond GTA V to bring me back to a console.


After putting several hours into the game, I’ve come to notice a few things.  The polish and initial glimmer has worn off.  It’s still a good game, but it’s very easy to see the flaws.

The biggest issue thus far is connectivity.  I’ve spent several hours trying different network configurations with my 360.  Everything from DHCP to a static IP with specific ports open in my router’s firewall, none of it has helped.  Sometimes, I’m able to get a few hours in without being disconnected and others I’m disconnected as soon as I load a mission.  The errors given to me, Caterpillar and Hawk, seem to indicate problems with my network configuration or other issues they’re currently “working very hard” to resolve.  Time will tell.  But when I can’t trust my connection to join a strike mission or story mission, it hurts the experience.

And part of that blame I will lay at Bungie’s feet.  Destiny requires players to have an active internet connection to play.  However, a great deal of the content can be played solo.  If they would simply implement an offline mode so I don’t lose all of my mission progress when the connection craps out, I would be very grateful.  And when I’m able to reconnect to Xbox Live, feel free to dump me with the other players at the next zone loaded.

Issue number two comes in the form of environment design.  What does a derelict Russian spaceport, the moon, and a jungle on Venus have in common?  They’re all varying shades of brown or gray and surrounded by mountains.  There is very little to differentiate areas and this wore me down quickly.  After spending hours trudging through the same spots on Earth and the Moon, I was ecstatic when Ghost mentioned the “jungles of Venus”.  Sure, there are jungles.  They’re just in the background.  I hope you didn’t get sick of brown mountains and ruined buildings.

The only places with any real character are the Tower and the Reef.  The Tower acts as a player hub bathed in the light of the Traveler.  It stands tall above a cityscape and is crowded with colorful players, banners, and ships.  The Reef, a floating graveyard in space painted with ethereal lights that can’t even be accessed beyond cutscenes (from my play experience).  Granted, I haven’t played Mars yet, but I don’t have high hopes for the red planet.

Enemies are plagued by the same lack of variety as the environments.  Each planet introduces a new faction of enemies to contend with, but they all fall into the same rank and file.  There’s the low level grunts that are easy kills, the slightly bigger guys with more health and a shield they deploy, the even bigger guys that hit hard with melee, and the floating robots with no limbs.  You could just change the uniform of an enemy and they would fall in line with the other army.  And while it’s fun shooting bad guys, a little difference in types goes a long way.

And for being a first-person shooter, Destiny plays a lot more like a cover-based shooter.  Enemies constantly hide behind any cover they can find and pop out in predictable patterns or force you to flank them for an even easier kill.  Coupled with predictable “hold them off while I hack this” mechanic and “we need to kill this slightly larger generic enemy” at the end of missions and you’ve got a taste for the first dozen hours of play.  And if there hasn’t been any change in pace thus far, I don’t imagine the end game is going to play out any differently.

Speaking of playing things differently, Peter Dinklage takes up the role of Ghost, your small AI companion.  While he initially seems charming, I quickly found myself thinking Tyrion had phoned in most of his performance.  Each line is delivered with deadpan enthusiasm.  I thought it might be due to the fact he’s just a robot, but there is another race of playable robot characters with far more personality.  He’s not annoying by any means, but it’s not terribly believable.

I still have a ways to go before I’m finished, but these things nag at me.  I’m enjoying my time with the game, but it’s hard to see past these glaring flaws.  When each zone and enemy is near identical to the last, what’s the point of having several different ‘flavors’?