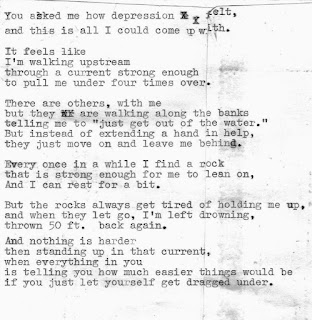 Lately, I’ve been struggling with my depression.  Like some great beast, it swallows me whole without warning.  And when people try to cheer me up or get me to snap out of it, I’ve been responding with this picture.  I found it in the annals of the Internet and I’ve not found anything since that so accurately describes depression.

I was diagnosed with manic depression at 17 after displaying a psychotic episode.  Looking at the definition for the condition sums me up almost perfectly.  Through both medication and therapy I was treated.  If that made a significant difference in my behavior, I can’t be sure.  My memory is fuzzy at best on many things.  Since then, I’ve felt increasingly worse as the years wear on.  I’ve never been a happy person, but a foggy memory makes the past seem sunnier.  Regardless, I stopped treatment shortly thereafter and have since forced myself to live with this condition.

I try not to use this condition as an excuse for my behavior.  Frankly, it’s because people don’t really give a flying fuck.  With everyone and their brother having some sort of condition these days and all the hand-holding that goes on, I don’t expect special treatment.  So, I mask what’s going on the best I can and deal with the world.  While no day is easy, some are much worse than they could be.

I mentioned that depressive episodes can come on without warning.  Usually there are factors that play into this.  These triggers can be recognized and dealt with for the most part.  I’ve worked very hard to identify these triggers and nip them in the bud when they come up.  But you can’t know how some things will affect you.  Especially when you’re already grappling with an episode.

Today for instance, Where is My Mind by The Pixies came on over the radio and I shut down.  I had no idea that a song I usually enjoyed would gently push me into the deep end of despair.  With no real warning, I was drowning.  And when I reached out to my rock, they slapped my hand away and I went tumbling backwards.  I’d finally worn them down and now I’m lying at the bottom, beaten down by that current.  And I’m done getting back up.

This is not a cry for help or pity.  I am stating facts.  I don’t want you to call me and tell me that everything is going to be okay.  Over the past 13 years, I’ve heard it all.  And for 13 years I’ve been getting back up and trying again.  This is me giving up.  I am done actively trying to bring happiness into my life.  And before you argue that only true happiness can be found within oneself, save it.  For reasons I won’t get into, I already hate myself more than you ever could.  So the chance for me loving myself and finding that inner peace was never an option.

I had already given up on myself long ago.  I’ve accepted that there’s no curing me or making this better.  There isn’t anything that will allow me to sleep at night, nothing that will permanently absolve the physical pain I constantly feel, or will let me believe that I am a halfway decent human being.  But because people still expect and want things from me, I keep getting up in the morning.  It’s a fairly pointless existence when you only live for others.

And that brings me to legacy.  Ultimately, our lives are meaningless.  On that grand cosmic scale, you and I don’t matter.  But that doesn’t mean we don’t matter to those around us.  That doesn’t mean we can’t leave some lasting imprint on humanity.  But let’s face it, 99% of us aren’t even worth a footnote in the history books.  And despite protests from literally everyone, you have to acknowledge the truth that after a few weeks of my passing, everything will go back to normal.  And once my son grows up and passes on himself, there will be no one to remember me or celebrate what I’ve done.  I am a meaningless blink in the life of this planet.

At some point, I will kill myself.  It’s the only conclusion that makes sense for me.  Unless I’m taken out in a freak accident beforehand, I will be the one to end my life.  Yes, I know how and yes, I’ve prepared for it.  At that point when I’ve found no reason to keep going, I will cease to be.  The reality of it is that I’m just checking off boxes before I punch out.

Am I sad about it?  Sure.  But I’ve been sad for so long that I’m largely numb to it now.  When you hurt constantly, you start looking for that escape.  And I thought that by finding one rock after the other, I could keep going.  But seeing people grow tired of me and eventually resent me hurts all the more.  So the only logical conclusion is to not get up again.  I don’t know when it will happen and I’m sorry if you disagree.  But to me and my broken mind, it’s the only thing that makes sense anymore.

With all that being said, depression isn’t a death sentence to everyone living with it.  There are plenty of options to help work past it and live a better life despite it.  I realize I am a hypocrite, but if you find yourself suffering, reach out to someone.  There are complete strangers that will fight to help you.  Don’t let it go untreated and don’t be too stubborn to accept help.  There is so much good that this world has to offer.  We can’t let the unwashed masses have all the fun.