If there is one thing that irks me more than any other about the current generation of games, it is the lack of local cooperative play.  It was something that began with the previous generation of games.  Slowly, but surely, more and more developers started cutting what was once a staple feature.  Now, you'll be extremely hard pressed to find a game that isn't made by Nintendo and supports a party of gamers sharing the same couch.


Enter Gurgamoth.  For some time now, I have been lamenting that gaming has hit a dull point.  This is a similar sentiment I had back in 2009 and 2010.  I've been trying to find a game that snaps me out of the endless slump of shooters.  As if the faceless ones heard my plea, I received an email from the folks at Galvanic Games.  They had released a new game.  A game that promised lightning fast combat, tight controls, and local co-op.  In fact, that's the only mode it has.

Gurgamoth has up to four players selecting from six different cultists to do battle in a free-for-all.  That's it.  There's no teams, no single player mode, no online mode, and no progression.  Simple.  Just choose your favorite little cultist and then kill everyone else to appease and summon the titular Gurgamoth.

In an age where so many games are packed full of content meant to keep players engaged, and with the promise of DLC keeping them further locked in, it can be a bit much.  So many games require absolute dedication to master.  If you stray to another game too long or are just a casual player to begin with, then it really sucks to be you.  You'll fall behind the pack, miss out on awesome world events, and generally be a worse player in the competitive scene.  It's a time where people are worried about character levels and kill/death ratios.

Gurgamoth does away with all of that and it is a much needed breath of fresh air.  Do you want to know what Gurgamoth truly is?  It's a party game.  It's a fantastic party game.  All you need is a computer on par with an Easy Bake Oven, a set of controllers, and the people to play it.  Hell, if you're running it off a laptop, have a USB hub, and an HDMI cable, you can connect it to that fancy big screen in the living room and really go to town.

Among the six cultists, there is some fairly good representation.  Cavendish is evocative of Lovecraftian lore, Nekren-Pha is Egyptian, Thragg a Viking, Xiatat is Mayan/Aztec, Morok a fan of Sauron, and Lilith just a fun little psycho.  Each is adorable and colorful and it's those colors that keeps things straight amidst the chaos.  There are no special power-ups for individual characters or any unique abilities.  Simply pick the one that is the most aesthetically pleasing and kill everyone else. 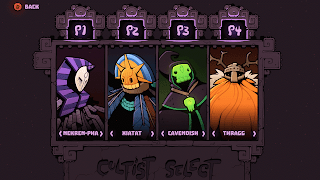 No, what makes Gurgamoth unique and really adds the challenge are the levels.  There are several to choose from and each behaves quite differently from the last.  Each cultist flies around and tries to bash the others into the many hazards on the level.  These could be spikes on the wall, happy moons that spew lasers of death, or saw blades hewing down a forest.  Some levels will shrink down and force the players into tighter spaces, while other power-ups can split the screen to disorient players.  It's fast.  It's chaotic.  It's more fun than witnessing a great one.

Gurgamoth must be played with a controller.  In my instance, I simply connected a few Xbox One controllers and it worked beautifully.  The controls are spot on and there wasn't an instance where I died and thought it was anything other than my fault.  Aside from the level design, this is where the real complexity of Gurgamoth is to be found.  It's a game that is simple enough to get into and have fun with, but when you start uncovering the intricacies of the controls and abilities, it becomes engrossing in its depth.

For example, each player has so many points to attack, stun, or phase with.  On average, each player has three.  You can burn through them quickly, and they recover just quick enough to keep you in the action.  However, you can try to stun other players and aside from rendering them crippled, you have taken their points in a vampiric ritual.  Phasing allows you to pass through other players and obstacles.  It can be quite effective to phase through a charging opponent in order to let them pass through, so you can smash them from behind.  It's like a frantic game of Rock Paper Scissors. 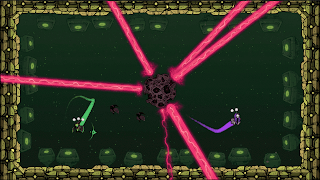 The overall design for Gurgamoth is brilliant.  When I first played it, I immediately thought it was Lovecraft for kids.  It's dark, kooky, colorful, macabre, and adorable.  There is shocking amount of detail in play.  From multiple layers of the levels moving around, to the way the little cultist capes flap like wings, it's a feast for the eyes and I was always spotting something new.  It's a stark departure from the muted palates of more realistic games without falling into a pixelated mess of 8 and 16-bit knockoffs.

Where the art design leaves off, the sound picks up.  The soundtrack alone is worth picking the game up.  Much like the artwork, it's a amalgam of occult darkness mixed with a vibrant buoyancy.  It's what I would expect to hear if I went to a rave with Cthulhu and the Wolfman.

While I an enthralled with Gurgamoth, there are some weaknesses.  Well, one.  And it's not really a weakness.  Since it only supports local co-op, there's no way to play it by yourself.  This is a game that I probably would have invested dozens of more hours into already if I were able.  As it stands, I need to invite someone over or lug my entire setup to their place to play.  An online component or even the chance to battle AI would be extremely welcome.

As it stands, the only issue I have with the game is that I can't play it more.  It's simple, straight to the point, and very good at what it does.  If you have a regular game night with friends, or want a great way to break the ice at a party, Gurgamoth is the way to go.  It's deceptively simple and complex enough to keep you coming back for more.  The art design is among my favorite in any game and I'm itching to play some more.  As of this review, it's only $9.99 on Steam and well worth the asking price.  Go pick it up now!