App of the Week: Alto's Adventure 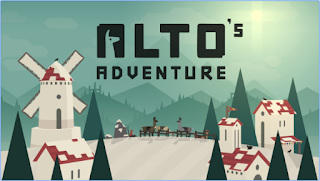 Endless runners have easily become one of the more popular genres on mobile. They're simple enough to get into, but also frustratingly complex the further one gets into them. Entering into this arena, but not necessarily sticking too much to the formula, is Alto's Adventure.

Alto's Adventure centers around a young llama herder whose sole exercise in this excursion is to capture the runaway beasts. The journey will take him down never-ending mountainsides, through villages, ancient ruins, and gloomy forests. Along the way, he's pursued by folks of the forest for reasons that are never really explained.  Once they catch him, it's a bonk on the head and the run is ended.

First and foremost, Alto's Adventure is absurdly good looking. It really reminds me of Monument Valley in its simplistic design and use of color. This is an art style that I would definitely love to see permeate more games. Eschewing the traditional over-the-shoulder shot of most endless runners, Alto's Adventure uses a wide shot of the player speeding down the mountain. There are weather effects that don't affect the gameplay, but do provide a nice change of scenery as Alto speeds down the hills. Throw in a revolving day and night cycle and there isn't much more one could ask for.

There's only one button to push and it's just to jump.  Holding it down will rotate Alto, causing him to perform a backflip. This, combined with grinding on rails and jumping over gorges are really the only tricks to be found in the game. It's simple, but addictive.

The sound effects, much like the rest of the game, are simple. The background music is soothing and makes the game perfect to relax to.

To give player incentive, there are over 180 goals to be completed while playing. Goals are broken down into sets of three which comprise a level. Complete all three to move onto the next level. These can things such as making it a certain distance, catching a specific amount of llamas, or snagging a large number of coins in your run. There are six different snowboarders to unlock and they each boast different abilities. However, I have not unlocked any at this point and can't comment on this. There are different powers and stats to unlock and upgrade. These can be purchased with the coins collected on the slopes. Again, it's not much, but it's enough to keep players interested.

Recently added was a Zen Mode which removes the scoring elements and introduces a new soundtrack. The idea is that one can relax even more while playing an already great title.

If you haven't figured it out already, I absolutely recommend picking up this one. It's quick enough in the gameplay to warrant playing in almost any situation, but engaging enough for longer play sessions. the artwork and music are sublime and easily puts it near the top for one of my favorite mobile titles.
App of the Week