App of the Week: Tap My Katamari 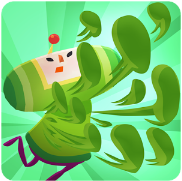 One game series that has always held a special place in my heart is Katamari Damacy. The premise is simple, the beautiful and wonderful King of the Cosmos has accidentally destroyed all of the stars, planets, and other celestial bodies in the galaxy. It falls to the tiny, but capable, shoulders of the Prince to roll up content on Earth the help of his Katamari so it can be turned into new planets, etc.


Katamari has always been off-beat with its quirky artwork, exuberant music, and wholly unique gameplay. I played the sequel on PS2 to death and devoured the Vita installment with great enthusiasm. Since then, I've been waiting for a chance to roll up items once more. Several months ago, rumors began to swirl that Bandai was planning a new Katamari for mobile. Of all the games that seemed a perfect fit for mobile, Katamari was near the top of said list.

Instead, what we got is arguably utter garbage. I had not been familiar with the term "idle clicker". Now that I am, I have no idea why this is a genre. The premise of Tap My Katamari is similar to the original games. The Prince has a katamari which must be used to roll up items on Earth. But instead of the classic gameplay which had you controlling the katamari through incredibly dense levels, TMK goes the 2D route and forces you to tap the screen for eternity. The Prince rolls his katamari in a straight line as items come to it via a conveyor belt. That's it.

Like earlier entries, you can find the Prince's cousins to help roll the katamari. The Prince can also be leveled up through collecting the conveyor belt items and increase stats like strength and magnetism. But honestly, after two minutes of playing this game, I don't know how you wouldn't be bored.

Despite my love for Katamari, I can't recommend this app at all. It's a disappointment on every level and I can't wait to uninstall it.
App of the Week