App of the Week: Abyssrium 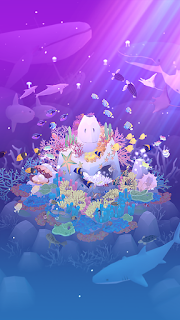 The mobile platform still confounds me when it comes to gaming. There aren't normal conventions like platformer, shooter, or RPG. Instead, there are idle clickers, endless runners, and match three games.

Now, these games may be entertaining, but for myself, that entertainment is short lived. At most, I only find myself playing a title for a few weeks. The ones I played longer were on my Windows Phone, and I believe a large part of that was because it was my first foray into the smart phone arena. Now that I am entrenched in the Android ecosystem, I find myself stumbling over an embarrassment of riches.

When I started writing these reviews, I wanted to cover apps that I enjoyed and would have no problem recommending to others. But, thanks to that previously mentioned embarrassment of riches, I'm coming across more and more garbage. So, I'm going to be falling back into old reviewing practices.


Abyssrium falls under the aforementioned category of idle clickers. Now, I was fairly harsh on my review of Tap My Katamari because of this. Idle clickers are really games. They're good for wasting time or filling voids when there's nothing to do. As such, the entertainment value is inherently low.

That's where Abyssrium embraces the flaw and turns it into armor. If I had to be technical, Abyssrium isn't fun. The entire point of the game is to grow your coral, create new types of coral, and create more fish. Repeatedly tapping the lonely coralite produces the currency needed to continue the buying and upgrading cycle.

Buying new types of coral and upgrading it increases the passive production of the currency. This is constantly accumulating and doesn't require the player to do anything further. There isn't a mandate to log in every few hours to harvest the currency. It's simply deposited into your account. And this is good, because Abyssrium is a very expensive game. New purchases and upgrades get progressively more expensive.

Now, Abyssrium is a free to play title. That means, like many others in this genre, that it is loaded with all sorts of ways to produce more currency or add new critters...at a price. Now, there are a fair amount of goodies to be had at a "cheaper" way. This involves watching ads for other games or services. I only play the game twice a day, once in the morning and once in the evening. The option to watch the ads always refreshes quickly enough for it to be an option in the evening.

The game touts itself as a means of relaxation. While the gentle tones and the stylized visuals, it does have a point to argue. But, there is so much information constantly being displayed across the screen with every action, it can be argued otherwise.

Either way, Abyssrium is one of the more rewarding titles I've played on mobile. I don't always have time to dedicate to games on phone or tablet. So one that not only doesn't punish me for not playing 24/7, but rather, keeps progress still moving is refreshing.

As someone who kept a small beta fish alive for a very brief time, I can say that this is much easier. There is also the option to use it in VR mode with Google Cardboard. But, I don't have that, so I'm unable to comment on it. Abyssrium hasn't changed my opinion on idle clickers entirely, but it convinced me that they can't all be bad.
App of the Week