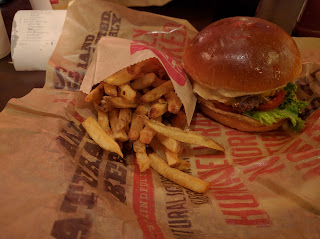 Verdict:
When you're having a day out on the town, what better way to top it off than with a trip to a burger joint? Probably a pedicure, but that's another story. No, a burger was not in the plans that day. After several hours of enjoying all that aquatic life has to offer (including seeing a beluga poop!), the lady and I headed to the cafeteria at the Shedd, only to find it was closed (despite it being an hour before the actual aquarium closed). So, based on location, this left us with a few options. All of which were in the Loop and required some city driving .


A few missed turns, some crying, and $30 in parking later, we hit the streets. Nothing was striking our fancy and it had been a long day. We were a bit tired, I had a headache brewing, and we were starving. Fast forward to a quick Google search revealing Epic Burger was located nearby. I had never heard of the place, but with a name like that, it was a bold claim and one I meant to challenge.

So we walked through several blocks of memory lane as the route itself took me along the path I walked in college everyday. Eventually, we arrived. After a trip to a psychedelic bathroom, I took in the fairly sparse menu.

The burgers themselves aren't pre-made in the sense that you pick a number and that's the burger you get. Instead, there is a list of ingredients that you choose from. Relay that to the helpful person behind the counter and said burger appears at your table minutes later. So, being a fan of breakfast and burgers, I combined the two with the ingredients listed above. I added on their signature sauce as it's always good to try new things and who knows when I would be back to try it again?

The burger came out quick enough and looked delicious. Now, there is some peril associated with eggs on your burger. More often than not, they are fried. This leads to the yolk popping, merging with the natural sauces of the burger and whatever else was on it and then making a mess. To say that this was a mess is to put it lightly. I went through several napkins before making it halfway into the burger. But my oh my, was it worth it. It could have been the long day and the healthy appetite that had been worked up, but this hit the spot in all the right ways.

Epic Burger touts themselves on their organic ingredients and Angus beef. The meat itself was perfectly cooked and juicy. That juice mingled with the Epic Sauce (Dijon mustard mixed with white wine, but tastes like chipotle sauce) into a delicious cacophony of flavor. The buttered and toasted bun gave a flavorful crunch to the contrast of the fresh ingredients. The tomato was ripened to perfection. It lacked the sometimes hard core, but wasn't soggy and limp. The lettuce gave texture without tasting dry or like a house plant. Overall, it was an excellent burger.

Now, while the burger was good, it was also more expensive than I would have liked. For two burgers, an order of fries, a shake, and a fountain drink, we paid around $27. It's very much on the high end for what I've paid for a burger. And while it was good, I don't know that it was that good. There are plenty of alternatives that compare in taste but are half the price.

On the side:
What looked like home made fries cut fresh from potatoes with a helping of salt. A superb shake that was the perfect consistency. A local made root beer that wasn't anything special.
The Burger Gourmet