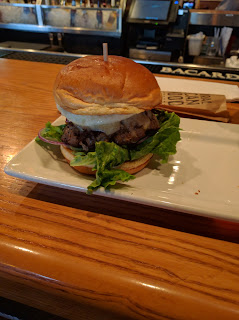 Verdict:
Oh, New Year's Eve. A time where people gather to celebrate the end of a year and the start of another. A time where those that have nowhere to be and no one to be with belly up to a bar for what should be a good meal.


This was not the case for Chili's. The metal chairs grated against the concrete floor and screeched in my ears. At the end of the bar, five over-sized televisions played all manner of sports with their volume each turned up and creating a confused wall of noise. The bartender only paid half attention, procuring a refill only when I was nearly done with the meal and had been sitting without a drink for 10+ minutes.

The burger itself was full of flavor, but not in a good way. Each of the items on it was poignant and clashed with the others. The dill pickle was far too tart and had to be immediately removed. But the damage was done and the juice had soaked into the burger, tainting it. The red onion was far too powerful and actively stung. I had not encountered this before and I typically love onions. The lettuce was dry and tasted like I was chewing on a fern. The bacon was overly processed and the thickness of it felt like I was chewing through leather. The fried egg was entirely cooked through, so there was no yolk popping. But this didn't stop the burger from raining on my plate thanks to the over abundance of tasteless Chili's signature sauce and natural grease of the burger. It was a mess in every sense of the word.

On the side:
The fries were the only good thing about this travesty of a meal. I was already fairly hungry, so I greedily devoured the generous helping of fries.
The Burger Gourmet