App of the Week: Imgur 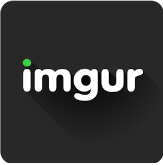 I don't know why I'm loathe to recommend this app. Maybe it's my own self-hatred for spending so much time on it. Time that I could spend being productive. Maybe it's that I don't want you falling into the same trap that I have. But odds are you're already ensnared with it or its half-brother, Reddit.


Imgur, for those that aren't familiar, is a site that allows users to post pictures and gifs. Other users can upvote or downvote the post, add their own comments, and "favorite" the post which saves it to their own personal gallery. The site is rife with in-jokes, reposts, rants, sob stories, and nudity. For these reasons, it is absolutely perfect at sucking a person in, turning their brain off, and making several hours disappear in an instance.

I hate Imgur, but I love it at the same time. I use it on Android and made the mistake of deleting it once. I wasn't being as productive as I wanted, so I sought to remove the source of distraction. In doing so, I deleted the dozens of saved photos I was using as my phone's backgrounds. It was my own fault for not realizing they were being saved in a folder created by the app. So, I had no choice to get back on the crack pony.

While undoubtedly your will is stronger than my own, I still advise caution. You will be sucked in.
App of the Week