App of the Week: Retro Shooting 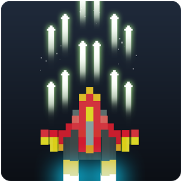 Loyal readers will know that I'm terribly torn on mobile gaming. I greatly enjoy playing games, but there is such a distinct lack of quality games available for phones and tablets. If something becomes mildly popular, there are so many knock-offs and shovelware created, it creates bloat in the marketplace. For the most part, I've given up on mobile gaming. I'd much rather use my phone or tablet to be productive (crap, I think I'm turning into an adult). That being said, every now and then, a gem comes along.


Retro Shooting is a fairly standard flight and shooting sim. It hearkens back to classic titles like Galaga and Centipede. You control a little fighter jet that must clear waves of enemies, make it to the end of the level, defeat the boss, and move on to the next level. There is a plethora of power-ups to be obtained in the level, and are usually gained by defeating certain enemy types. There is a decent variety to the enemy types and I was delighted to find they all have a pattern.

Indeed, the biggest challenge is controlling the little spacecraft and avoiding the balletic swerving and dancing of enemy flight paths and gunfire. The player's ship is controlled with a single finger, but players have the entire range of the screen to move it. As the levels progress, chaos ensues, and complete focus is required to emerge unscathed.

Retro Shooting definitely lives up to the "retro" part of its title. The graphics are rendered with beautifully simplistic polygons. The gameplay and mechanics should come as second nature to anyone familiar with arcade titles of old like this. And much like the old arcade cabinets, Retro Shooting makes excellent use of the vertical nature of a phone or tablet screen.

While playing, ships will drop gems. These coins are used to upgrade your ship. Upgrades range from increased damage to a larger radius of attraction for the gems. The upgrades are fairly expensive and there are multiple levels, so there is plenty of incentive to continue playing.

Since the game is free, of course there are in-app ads and options to purchase gems, etc. That being said, Retro Shooting keeps the ads limited in the sense that they're present, but not intrusive.

If you yearn for classic shooters of years gone by, or if you simply want something fun to play, Retro Shooting is worth the download.
App of the Week