What would happen if you suddenly woke up one day with two sets of genitals? A confusing combination that drives you mad with lust and desire? A duo that has a dynamic impact on your social and work lives? It’s a question asked and ultimately answered as we gaze through the eyes of Futa Fix: Dick Dine n Dash’s main character, Emily.

While it may deliver on said pornography, it does so in a bit of a clumsy fashion. The game opens with a prologue that sets the stage and delivers the player into a quandary of decisions. Namely, which acquaintance will Emily pursue first: her boss or her coworker? At this point, the player is sent back to the main menu to choose the next chapter. Each chapter is essentially the character selection. Rather than be presented as a choose-your-own adventure, it delivers the story more as alternate timelines and even acknowledges this in the finale.

As the player progresses through the chapters, a theme or blueprint becomes apparent. Emily was cursed by a magical entity with her newfound junk. She doesn’t know the hows or why, but ultimately secluded herself for fear of her new member being discovered. Through these conversations, it is unveiled that Emily used to be quite outgoing and had a large group of friends. By meeting, befriending, and hooking up with friends, coworkers, and strangers, Emily goes on a journey of self-discovery.

This was where Futa Fix really shined for me. There was a surprising amount of depth to be had. Relatable and complex issues like anxiety, depression, and self-acceptance are delved into from multiple perspectives. Each trip through an alternate reality allows Emily to come to terms with her newfound friend and how to move forward with her life. 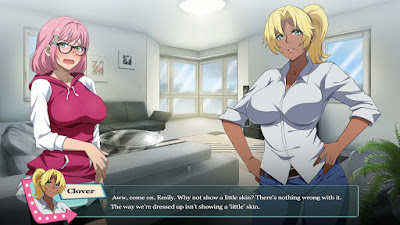 If I’m going to be honest, there’s no real “gameplay” to be found here. Futa Fix falls under the Eroge category, which itself, has several loose definitions. The closest that would aptly fit here would be a Visual Novel. Visual Novels are what one would think, it’s a story the user clicks through. No more, no less. Despite only being a game in the loosest of definitions, Futa Fix is still enjoyable. In fact, of the visual novels I’ve played, it stands head and shoulders above the others. But, this isn’t due to the gameplay (or lack thereof). There isn’t anything engaging about clicking to progress the dialogue. It’s like reading a comic in ComiXology with the action view on. You’re simply ushered along on rails.

In fact, the only bit of “game” that comes about is when you must make a choice. However, these are usually thinly veiled “yes” or “no” dialogue choices to engage in carnal activities. These choices are so plainly obvious, it becomes an almost intentional decision to direct the conversation so that you would get the “good” or “bad” endings for each chapter. In terms of longevity, there are several chapters to explore. Each chapter follows Emily on an adventure with a coworker or newfound friend. Each is roughly 1/2 hour in length. All told, it took me a little over five hours to go through the entire game and achieve each “good” ending.

I will say that the game is extremely well suited for a touch interface. In fact, that is how I played it almost exclusively. I installed it on a virtual PC and connected via my iPad. It makes me wish that more eroge/visual novels would be made available on the mobile platform. Like Futa Fix, they’re usually light on content and easy to dip into for a few minutes to a few hours. They’re nothing that would require a dedicated PC or console. But with content restrictions being what they are, it is unlikely we’ll see any meaningful progress there.

Futa Fix uses all hand drawn artwork and to good effect. As someone who has been working with a similar style for decades, I always appreciate when a game goes with this style. It always reminds me of a time where games like Darkstalkers and Street Fighter really went that extra mile with the artwork. While the artwork for the characters and backgrounds aren’t fantastic, that’s not to say they’re bad. Like Emily’s newfound member, each drawing, animation, and setting is solid. Unlike several other games in this genre that can lure buyers in with fantastic box art and promo shots, only to have a game filled with mediocre art, Futa Fix doesn’t pull any punches. From timid start to climactic finish, it is consistent. And that consistency is key for a game like this. The environments become familiar and a bit cozy. It’s easy to flesh out this world in my head due to the delightful art and strong character development.

Did I mention animation? I most certainly did. During several scenes, Futa Fix employs animation to really drive home what is happening. They loop, similar to a GIF, but breathe life into what could otherwise be a static gameplay loop. 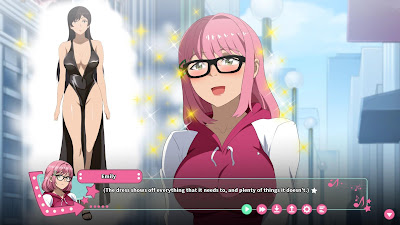 Futa Fix employs partial voice acting and an original soundtrack.  Unfortunately, it’s largely forgettable. The voice acting is competent, but I quickly reached a point where I would simply read the subtitles and click to proceed, cutting the speaking character off entirely. This led to me just turning off the sound entirely. For me, it still worked very well. After all, this is just a novel, like any other. The sound didn’t add anything and it’s loss didn’t detract from the experience. Take that for what you will.

Futa Fix Dick Dine n Dash is a breath of fresh air. These days, most games I play take themselves far too seriously and require too much time from the players. Be it a ridiculous grind to pad play time or a live service that punishes you for taking time off, it can be a little much. Which is one of the reasons why I loved Futa Fix so much. I didn’t expect much going in to this and couldn’t have been happier with my time spent in it. The lovable characters have real depth and the world comes to life the more you delve into it. The playtime is short and sweet. The interface is simple and easy to navigate. The sexy fun times are very sexy and quite fun.It’s kind of like comfort food, a murder mystery novel, or a harlequin romance. It’s not earth-shattering in any area, but it doesn’t have to be. It’s comfortable, just the right length, and a delight.