A Starting Guide to Chocobo Racing in FFXIV

July 28, 2021
"Excited Chocobro Noises"
So you wanna be a racing superstar!? Race fast!? Get all the MGP!? Leave those dirty, filthy Lalafells in the dust!? I...I can't help you with that. You'll need another guide entirely for that. But! What I can do is teach you how to get started. And, you know, if you figure out the rest, lemme know.
Getting Started
To race, you'll need your very own chocobro. Unfortunately, your company chocobo can't be used here. Instead, you'll need to get your very own racing chocobo. To do this, you'll need to complete the quest "So You Want to Be a Jockey" which is acquired from the Race Chocobo Registrar inside The Gold Saucer.
To find the Race Chocobo Registrar, take the elevator lift in the blue colored section of the map. It's right by the vendors for Mini Cactpot and Triple Triad. 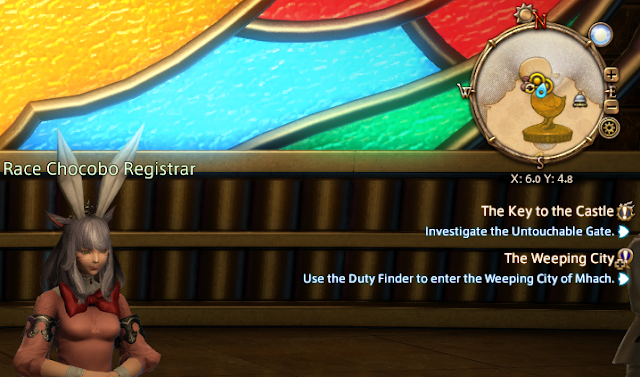 This quest will unlock the quest "So You Think You Can Ride This Chocobo" which takes you to Katering at Bentbranch Meadows in Central Shroud. 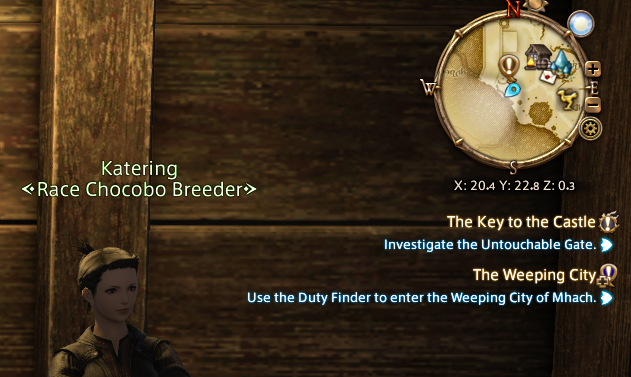 Completing these two quests will grant players the choice between a Fledgling Chocobo Registration G1-M or G1-F. The only difference between the two is Male and Female. From here, return back to the Chocobo Registrar at The Gold Saucer to register your bird. You'll go through the naming process and complete a training race before being allowed to race with other players. Once complete, races can be accessed via the Duty Finder or the Chocobo Registrar. Side note, your new partner can be accessed via The Fold Saucer menu and decked out in barding just like your more worldly companion.
Race Ranks
As you continue to race, your chocobo will gain experience, with a cap of level 50. At level 40, you can choose to retire your chocobo, but more on that later. Each level improves the strength of your chocobo and thus, its rating. Races are broken down into tiers so as to provide a fair match to all players. You wouldn't want to go up against a G9 chocobo with your starter!
Maiden Class: 1-20
R-40: 1-40
R-60: 41-60
R-80: 41-80
R-100: 81-100
R-140: 101-140
R-160: 121-160
As you move up in ranks, hazards will be introduced to the tracks that must be avoided, lest your chocobo be slowed down.
Racing
The actual races are a very straightforward affair. Players are matched against seven other racers. If available, these will be other players and NPCs filling in any gaps. Your chocobo will automatically run, but can be made to move left, right, accelerate/decelerate, and jump.
Maneuvering is critical to collecting power-ups, hitting boost pads, and avoiding hazards. Running into balloons will grant temporary power-ups that have a variety of effects from speed increases to slowing down opponents. However, keen players can see what item they will get by paying attention to the right of the screen. There is an indicator of the next four items in the loot pool. This could be critical to obtaining a much-needed item or denying one to an opponent.
Players may attempt to body block one another, so be mindful not to get stuck behind another and make use of good cornering!
Abilities
Aside from items that can be picked up during a race, chocobos can have hereditary or acquired abilities. Hereditary abilities come from breeding (we'll get into that later). Acquired abilities can be obtained from rank 10 onward. A chocobo that has yet to learn an ability has a chance to randomly acquire one each time rank is gained.
Alternatively, abilities can be purchased and taught via training manuals. These manuals are purchased with MGP at the Tack & Feed Trader at The Gold Saucer. Once purchased, speak to the Race Chocobo Trainer to apply the learned skill. If all the skill slots are filled, a Lethe Water may be purchased to forget an ability. Note: Hereditary abilities cannot be removed.
Stats
Each time a chocobo increases rank, a stat point is awarded in addition to the randomly boosted stat point provided. This point can be used to increase one of five stats all birds share.
Maximum Speed: Affects how quickly a chocobo can run when fully accelerated
Acceleration: Affects how quickly a chocobo can attain maximum speed
Endurance: Affects how long a chocobo can run before becoming lathered
Stamina: Affects how quickly a chocobo's stamina bar drains
Cunning: Affects how effectively a chocobo can navigate rough terrain
Now, I'm going to let you in on a little secret here. It's not something I figured out until my 3rd generation chocobro. Invest in endurance. Not a little, but a lot. Endurance is critical because it affects how long your chocobo can run before becoming lathered and how well they perform once afflicted. A high enough endurance rating will allow you to sprint the entire race whereas investing in speed and stamina can still leave you burning out before the race is over.
Stamina and Lathered
At the bottom of the screen will be a stamina bar. Running normally won't deplete the bar. Sprinting for any amount will cause the bar to go down and pulling back on the reins will negate that effect. Sprint long enough and your chocobo will become lathered. Once lathered, the stamina bar will deplete faster than normal. Once the stamina bar is depleted, your chocobo will run at a significantly decreased speed for the remainder of the race. 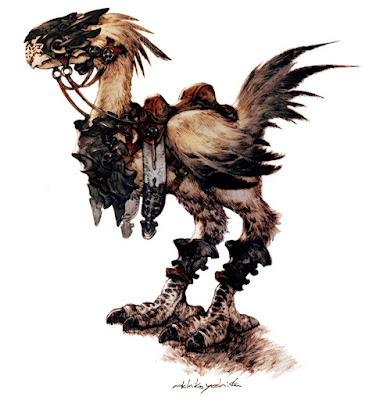 Breeding
As I mentioned earlier, once you reach level 40, you will have the ability to retire your chocobo. Why would you want to do that? Short answer? To breed it and make better, more powerful racers.
By breeding your G1 chocobo with a G2 breeder, the offspring will be a G2 and have improved stats over the G1 parent. Repeat this until you have a G9 monster of a racer with ideal abilities and stats.
As you breed stronger chocobos, their stats will place them in higher race tiers earlier, netting more experience and MGP for completions.
Once you reach level 40, the Chocobokeep near the race counter in The Gold Saucer will have a new quest for you, "Like Sire Like Fledgling". This will take you back to Katering in Bentbranch Meadows. Once complete, speak to the Race Chocobo Trainer to retire your bird. You will be able to offer some parting words which will help determine the hereditary ability. The offspring will randomly take the trait from either parent. From there, purchase a Covering Permission of the correct opposite gender one rank higher than your current bird. Take both of these back to Bentbranch Meadows and speak to Katering to get busy.
The chocobos will do their thing behind closed doors and you'll get a slip of paper saying to come back in a half hour to pick up your new fledgling. Once your bouncing baby has been collected, head back to The Gold Saucer to register them and start the process all over again.
The things covered here are the basics. But they're basics I wish I had known when I started, so they should be of some help to you. There is a lot more to dive into, especially when it comes to breeding, but there are loads of comprehensive guides out there. But, until you get to that point, grab your bird and we'll meet on the track.
Art