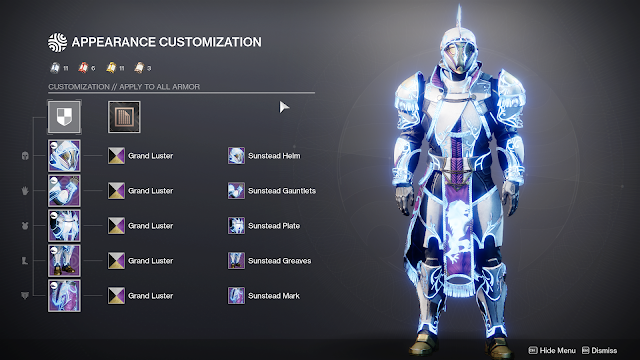 This past Thursday, it was revealed in the TWAB, that Bungie would be making some changes to how Armor Synthesis works in Destiny 2.

"Since the launch of Season of the Splicer we have been monitoring reception and behavior around our new Armor Synthesis system. Today we’d like to review a minor update around the system’s currencies.

Effective at the start of Season 15 we will deprecate the passively-earned world currency, Synthstrand, that was used to purchase Armor Synthesis bounties from Ada-1. In its place, these bounties will be purchasable for 10,000 Glimmer instead.

Our hope is that this change reduces the time needed to earn your 10 Synthweave tokens per class each Season.

Removing this currency also frees up a slot in the Consumables inventory bucket — a bucket that could be full for those of you carrying around a large quantity of items. Finally, we hope this change reduces the complexity of the Armor Synthesis system, with only one remaining currency for each class that can be immediately turned in at Ada-1’s Loom for a Synthweave token.

We’ll continue to monitor the conversation and use of Armor Synthesis as Season 15 rolls out. In the meantime, keep showing us your new looks! The team is inspired and delighted by the incredible creativity they've seen from Guardians around the world so far. We can’t wait to see more!"

When it was announced, the Armor Synthesis system was met with significant pushback from the community. For years the community had been clamoring for a way to modify the appearance of their armor, with a system akin to transmog in World of Warcraft or glamour in Final Fantasy XIV. Instead, Bungie delivered a complicated mess of a system seemingly designed to make a grind so arduous that players would be forced to the Eververse. How so, you might ask? From Bungie itself:

"1. Defeat enemies to earn Synthstrand.
2. Spend Synthstrand on bounties to earn Synthcord.
3. Convert Synthcord at the Loom in the Tower into Synthweave.
4. Use Synthweave to convert an unlocked armor appearance (Legendary quality or lower) from Collections into a Universal Armor Ornament.

To start, players will begin earning Synthstrand when defeating enemies in Destiny 2. After earning 150 Synthstrand , players may visit Ada-1 in the Tower to acquire class-specific bounties, which will reward Synthcord."

The problem was, players figured out that Synthstrand didn't drop from every enemy. In fact, the drop rate appeared to be time-gated. Redditors alonie-homie and 13igB discovered it would take upwards of five hours to acquire one bounty. This would be for just one piece of armor.

For the initial season, Bungie doubled the amount of earnable Synthweave to 20 per class. Normally it would be 10 per class. So, for a total of 30 per account per normal season, the math wasn't adding up. There literally wasn't enough time to play the game and earn the materials necessary. More and more it seemed Bungie really wanted players to simply buy the Synthweave bundles in Eververse for 1000 silver (roughly $10). 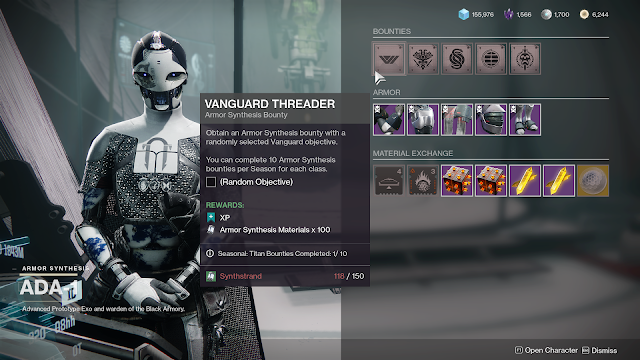 So, to see the time gate removed less than six months after the reveal of the system is both good and bad. It's great that they're moving relatively quickly and removing a hurdle that so many players took issue with. It's not so great that they thought a system was ideal in the first place. I understand that money must be made for a game like Destiny 2 to survive and grow, but greed must be kept in check.

Again, the ideal would be to have a system in place like those in WoW or FFXIV. Once a player has acquired a piece of gear, it should either A. be unlocked for transmog right away or B. be able to be converted to transmog purposes for glimmer. As it stands, there are already far too many currencies in Destiny, but little use for the "primary" currency of glimmer. Adding three more currencies instead of making use of an existing currency is baffling.

I guess we'll see if any further adjustments are made before Season 15 launches. As of right now, Season of the Splicer (Season 14) is set to end on August 24. With that being a Tuesday, it would stand to reason that Season 15 will drop on the 24th or 25th. Like anything else planned in Destiny 2, I'm cautiously optimistic.