Facing the Horror That is Resident Evil Multiplayer

July 20, 2021
"Why Does Campcom Shamble Like a Corpse with Multiplayer?"
Oh Capcom. Why does it seem that you are so incapable of making a compelling multiplayer version of Resident Evil? For years you have tried, languished, and largely failed to bring a compelling multiplayer experience into your terrifying world. Why? Could it be the development studios? Lack of support? Does the formula just not work? Let’s try and find out, shall we?

Released in 2003-2004 and developed by Capcom Production Studio 1, Outbreak and File #2 might be one of the most positively received multiplayer RE games by community standards. Released on PlayStation 2, a network adapter and account were required for online play. Players would choose one of eight characters to play through up to five different scenarios all based around the Raccoon City incident. The play style was similar to Resident Evil Remake. File #2 was released as a standalone expansion in 2004-2005. It added five new scenarios for players to survive. Capcom eventually shut down NA servers in 2007 and 2011 in Japan. In 2014, a group of fans created a private server to revitalize the game, called Outbreak Server. Despite a very vocal fan minority, Outbreak and File #2 only received mixed critical reception. 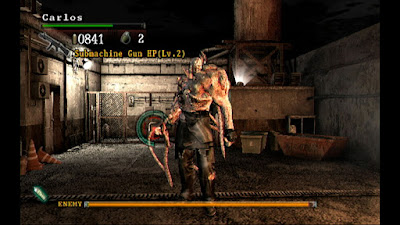 The Umbrella Chronicles was developed by Capcom Cavia and released in 2007 for the Wii. The Darkside Chronicles was a sequel developed by the same studio and released in 2009. Both games were later bundled and released as Resident Evil Chronicles HD Collection for the PS3. Each were on-rails shooters similar to the House of the Dead series. Taking place over the series’ timeline, players are able to relive key moments from the main games while learning new information regarding the Umbrella Corporation. Both games received a positive reception from critics and fans alike. 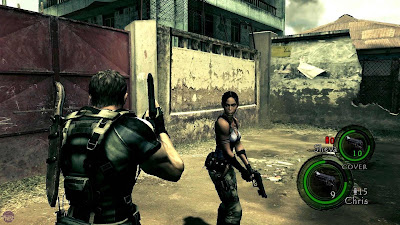 Developed by Capcom and released in 2009 for Xbox 360 and PlayStation 3, RE5 was the first game in the main series to offer multiplayer. Players could take control of Chris Redfield and Sheva Alomar through splitscreen or online multiplayer. Alternatively, if playing solo, an AI companion would tag along. Throughout the adventure, players could swap items, weapons, perform co-op actions, and work to solve puzzles together. To date, RE5  is Capcom’s best selling RE title and was the company’s best selling title period until the release of Monster Hunter: World in 2018. 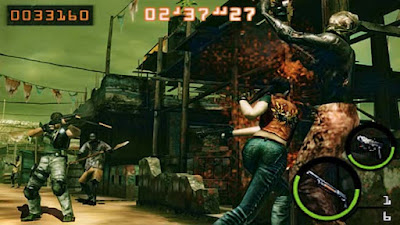 The Mercenaries is an odd one. Developed for the Nintendo 3DS by Capcom TOSE and released in 2011, Mercenaries was essentially a port of a mode present in RE4 and RE5. Offering co-op via WiFi, Mercenaries would be the first and last title in the series to offer multiplayer on a handheld device. 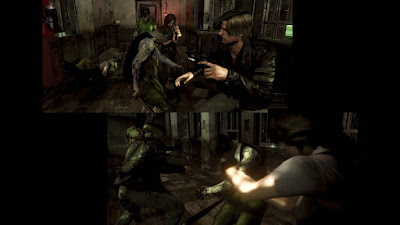 RE6 was the direct follow-up to RE5. Developed by Capcom, it was released in 2012 for Xbox 360 and PlayStation 3 and in 2013 for PC. Many, including myself, consider this the point that Capcom really jumped the shark. Nearly abandoning its survival horror roots entirely in favor of the immensely popular action-shooter genre, RE6 fell victim to the same poor design choices that ultimately destroyed other survival horror games like Dead Space. Players would take control of several different popular series characters in four interwoven campaigns. Much like RE5, RE6 offered both local splitscreen and online co-op. 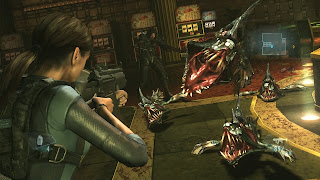 Revelations was primarily a single player game with a multiplayer mode. It was developed by Capcom and released in 2012 for the 3DS, then remastered and released in 2013 for PC, PlayStation 3, Wii U, and Xbox 360. The multiplayer portion was titled “Raid Mode” and pitted one or two players in altered versions of the main campaign. Defeating enemies and clearing objectives would grant money to be used for purchasing weapons, items, outfits, and additional characters across the game modes. Revelations hearkened a return to the survival horror roots and Raid Mode was praised for its engagement and replayability. 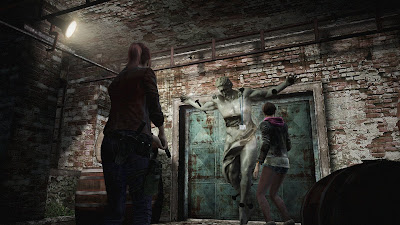 Revelations 2 is the direct sequel to Revelations. It was developed by Capcom and released in weekly episodes in 2015. In the main campaign, players take control of series favorite Claire Redfield and newcomer Moira Burton. In addition to the main campaign, Raid Mode makes a return. Sporting a significant upgrade in terms of content, the new Raid Mode featured 200 missions, 15 characters, and loads of customization options. During development for Revelations 2, it was revealed the Revelations series would focus on gaps in the mythology of the series while the main series leaned into the more action-oriented role it had taken. Much like the first game in this spin-off series, the co-op was praised. 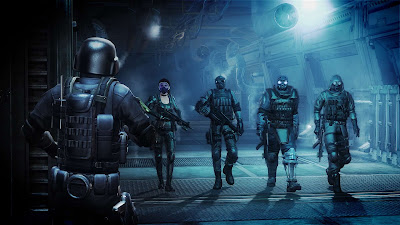 Working in tandem, Operation Raccoon City was developed by Slant Six Games and Capcom. It was released in 2012 for PlayStation 3, PC, and Xbox 360. It is one of the worst received games both critically and by consumers. My own personal experience includes the game, like many others tied to the Games with Windows Live service, being completely broken on PC. Taking a bold step in a new direction, the game focuses on Umbrella agents infiltrating the dying Raccoon City. They must cover up Umbrella’s involvement and procure a sample of the virus. According to reviewers, the game is best played with others as the AI can be unreliable. In addition to the four player co-op campaign, players can work against one another in a competitive mode that stars fan favorites like Leon Kennedy and the Xbox 360 exclusive Nemesis. 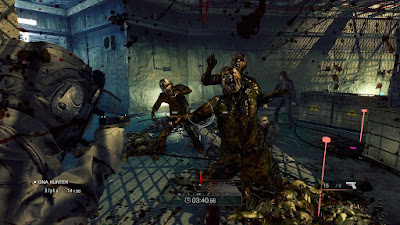 Taking a page from Operation Raccoon City, Umbrella Corps once again puts players in the shoes of Umbrella operatives. It was developed by Capcom and released on Windows and PlayStation 4 in 2016. The game was largely advertised as a PvPvE competitive shooter that featured NPC zombies. Players would be pitted against one another on small to medium sized maps. All three classes were equipped with a variety of weapons including a climbing pick and a “zombie jammer”. The jammer would make the zombie NPCs ignore players. However, the jammer could be tampered with by the enemy team in order to turn the zombies hostile. The game received poor reviews across the board for a litany of reasons, including poor design and lack of quality. 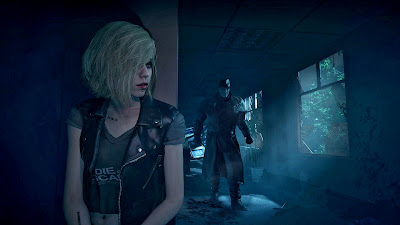 Oh, Resistance. My sweet baby. You were too beautiful for this world and killed in the cradle. Developed by NeoBards Entertainment, Resistance was bundled with Resident Evil 3 Remake and released in 2020. The game was a 4v1 asymmetric survival horror experience. The concept was that different scientists and entities involved with Umbrella had kidnapped victims, injected them with the T-Virus, and were now running them through a brutal series of experiments to measure the impact on virus growth.

Players could choose between seven survivors and five different masterminds. Masterminds would control cameras in the different areas each map occupied and could place various monsters and traps. Survivors would need to navigate said maps, complete objectives, and open final doors to escape. There were a bevy of skills and customizations available to each character, which offered high replayability.

However, the game suffered from cheaters due to a lack of dedicated servers. Patches were slow to be released and an aggressive loot box system was put in place. Of all the multiplayer RE games I wanted to succeed, this was the one I wanted most. I loved it and it kills me that Capcom never gave it the support it needed. 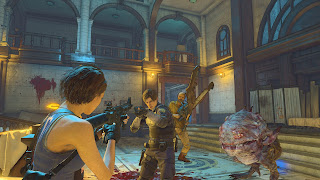 RE:Verse is a confusing mess of a game that isn’t even out yet.  Much to fans dismay, it is another competitive multiplayer experience that pits characters from the vast 25 year history of the series against one another. The cartoonish graphics in the preview are abysmal and the few that could play the demo have savaged it in Steam reviews. RE:Verse was bundled with Village and was due to launch at the same time. However, Capcom has just announced that release has been pushed back to 2022.

So, after 12 games and a 13th on the horizon, what is the “thing” that seems to be holding up Capcom from making a decent multiplayer game? Apparently nothing. Several of these games did quite well despite not having a lasting playerbase. Then again, it could be argued the viability of long-term player engagement in games like this. But, it would appear that Capcom is chasing trends with each release. Outbreak was a pseudo MMO like many others attempting the same thing on PS2 and DreamCast. In the mid-aughts we saw the shift to an action shooter. Resistance was the Dead by Daylight attempt. They have yet to take a stance and make something truly unique to the RE universe.

Recently we saw Dead by Daylight receive its own RE chapter with the inclusion of Nemesis as a killer, Jill and Leon as survivors, and alternate costumes that “unlock” Chris and Claire. Maybe this is a good sign. Maybe it’s time to let other studios handle the RE assets properly? Could they? History has proven this to be a mixed bag. Or…perhaps we’ll never see a remarkable RE multiplayer game.

The zombie genre is as bloated as a weeks old corpse. Perhaps the shift to other monsters is what this series really needs and it’s time to let the dead finally rest.