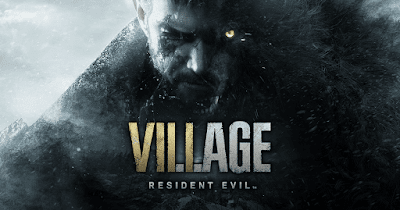 Alright, let’s not waste any time or try to kid ourselves. Resident Evil Village is a masterpiece. There, I’ve said it. It’s out in the open now. In the wake of so many AAA titles being released in a half-baked or broken state, it is the very epitome of a relief to see a game with this much hype released not only working, but excelling at nearly everything.

The story picks up several years after the events of RE7. If, like me, players had not experienced RE7, there is a recap available that broadly goes over the events to bring the player up to speed. It’s enough to let one know what happened without spoiling the experience. Players are then treated to a Tim Burton-esque sequence before revealing it was a bedtime story for new parents Ethan and Mia Winters.

Following what seems like a pattern of trilogies in the RE series, Ethan stars as the protagonist in his second outing. Events quickly turn things sideways and he’s set upon a quest to track down his missing daughter, Rose. The search leads him to a small European village, hearkening back to Leon’s trip in RE4. Along the way, Ethan is subjected to a litany of monsters, creatures, and larger-than-life characters. In fact, aside from the stunning views Village consistently delivers, it was these characters that I found most enthralling. 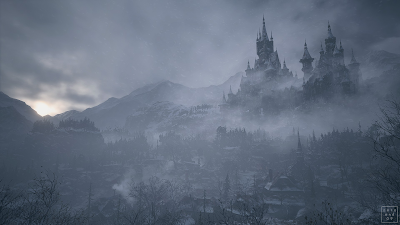 It’s not just the Lords and Ladies governing the town that are so engrossing. Mysterious characters like The Duke and even the villagers Ethan encounters are so completely fleshed out. Motivations are as unique as the mannerisms and models. There is a level of detail in every aspect that only helps to decorate this decadent experience. Everyone has a story to be told if the player digs enough.

But, Village follows the traditional Resident Evil format. Players are introduced to a starting area that was shown primarily in promotional materials. From there, the shock and horror subside a bit before revealing secret labs and conspiracies. It’s formulaic, to be sure, but it’s a formula I love all the same. The primary reason for this is the execution in each of the areas players visit. Each has a distinct theme and story-telling method. From the Dracula-inspired halls of Castle Dimitrescu to the Silent Hill levels of creepiness in House Beneviento, each area and mini-story is nearly a masterpiece in its own right.

The story moves along at a good pace without any noticeable slogs or portions that felt tired. Even after three play-throughs I found myself still exploring every nook and cranny, hoping to learn more. Much like any RE title, there is an abundance of notes to be found that flesh out the events of the world. Towards the end, certain pieces are set up for a third entry in the Ethan Winters trilogy. Not a cliffhanger, but more an aftertaste that left me hungry for more.

Village was my first foray into FPS Resident Evil. I skipped out on RE7 as the demo was far too scary and I wasn’t sold on hillbilly horror in a series primarily about zombies and biological monsters. After playing through Village, I realize how wrong I was. It was shocking how well the game lends itself to first-person as well as it did third-person. While I don’t necessarily see a benefit to either perspective, the take-away I had was that neither was a detriment. The only odd thing (that I quickly got used to) was that despite being a FPS, Village doesn’t utilize the iron sights when aiming. Rather, it opts for an arcade-like crosshair system that can be zoomed in. Otherwise, the game handled extremely well with controller.

The inventory system and crafting are nearly identical to RE4, so it was quite intuitive to navigate around and manage my stuff. One fantastic addition was the “bounty” system offered by The Duke. By tracking down and hunting certain animals, The Duke is able to whip up dishes that offer permanent stat bonuses to Ethan. It gave the back-half of the game a little extra life as I tracked down chickens and fish for my next feast.

Combat is fast, fluid, and frantic. From the first attack by “werewolves” on the village to the mutant soldiers found later on, each encounter is tense and terrifying. Ethan has a bevy of weapons at his disposal and he’ll need them to overcome the horrors he’s faced with. The bulk of the enemies are melee-focused with only a handful having ranged potential. That being said, most of the fights then rely on them having superior numbers that must be whittled down and engaged strategically in order to survive.

My first play-through was on the easiest difficulty as I wanted to experience the story and not worry about my skills failing me in a critical spot. From there, I took advantage of the unlock system and equipped infinite ammo for the starting shotgun. On my second play-through, I bumped the difficulty to normal and quickly found it was going to be a walk in the park. When play-through three occurred on hard mode with my infinite ammo magnum, the game was laughably easy. All of that tension and strategy I had mentioned earlier had completely gone out the window. So, subsequent play-throughs will lose the terror, but present a different form of fun as players become the monster beset upon this remote village. 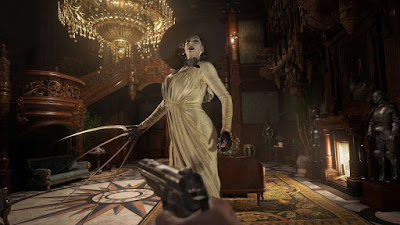 Along those same lines is the Mercenary mode. Rather than be subjected to the horror of monsters, players must fight against another kind of evil: a time rush. Racing against the clock and trying to rack up kills, perks, and points as fast and efficiently as possible is the key to this mode. Players are scored at the end of each run. Doing well will unlock bonuses for use in the main game.

I mentioned Village’s beauty earlier and it cannot be overstated how gorgeous the game actually is. Pictures fail to do it justice. The amount of detail each character, environment, and weapon receives is unreal. Capcom’s proprietary RE Engine is on full display here and it truly shines. I am consistently astounded at the level of quality and fidelity Capcom is able to put into a game without performance suffering.

Perhaps knowing that players would be so enchanted with the world they had created, Capcom did add a photo mode to the game. There are a number of options available, however, the end result is always tragically marred by Capcom copyright info boldly displayed at the bottom of said photo. I’ve not found a way around this and it is a shame. This single inclusion made the entire option pointless.

That being said, despite taking place in a relatively small village and the surrounding area, the number of environments available was surprising. From the run-down village to dank dungeons to industrial labyrinths, it’s all a visual feast.

Your eyeballs aren’t the only ones in for a treat. Ears get a special experience as well. Gunshots crack and monsters roar and howl. The surround sound options bring the horror to another level. All manner of nastiness bumps and creaks and shrieks in the dark before bloodied talons and fangs leap forth. Voice-acting is sublime with a masterful performance from each member of the cast. The accompanying soundtrack is a horror masterpiece, falling just short of the majesty that was the Bloodborne soundtrack.

By now it’s no secret the love I harbor for Village. It is a perfect balance of action, adventure, horror, and grand ambiance. Seven months into the year and it is an incredibly strong contender for my game of the year. I can’t recommend it enough to anyone remotely a fan of the genres it occupies. It only helps that the game does well enough to loop in the larger world without making new players feel lost. Again, it’s a taste that will leave you hungry for more.