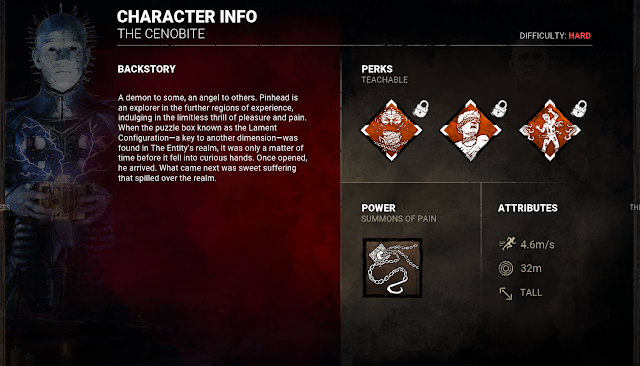 After weeks of speculation, dreams have finally become reality. Pinhead, from the acclaimed horror series Hellraiser is coming to Dead by Daylight as "The Cenobite". Who is this imposing and crafty figure and what does he bring to the realm of the Entity?

The Cenobite goes by many names, Hell Priest, The Engineer, Cold Man, and The Pope of Hell. But when those names won't do, most will refer to him simply as Pinhead. In life, his name was Elliott Spencer. As a captain of the British Expeditionary Force during WWI, Spencer suffered from PTSD and survivor's guilt. During the battle of Passchendaele he lost all faith in God and humanity. In the following years he found himself wandering the globe until eventually arriving in British India where he discovered the Lament Configuration. It was then that the powerful Cenobites were summoned and after some time, he joined their ranks before rising up as a leader.

The Cenobite comes with a unique skill and three perks, as is par for any new killer in Dead by Daylight.

Summons of Pain: An extradimensional gateway that leads to pleasure and pain so great it will tear your soul apart.

Press the Power Button to create a gateway and release the button to open it. Once opened, tap the Ability Button to summon forth a possessed chain under your control. Direct the chain into a survivor to bind them.

A survivor bound to a chain is unable to sprint. Their movement speed will decrease further as they're hit with a second and third chain. Survivors can perform the Break Free action to escape.

When The Cenobite picks up the Lament Configuration, a Chain Hunt is activated. Additionally, all survivors are instantly bound by chains, causing them to scream and reveal their locations.

The Lament Configuration will spawn in a new location after The Cenobit or a survivor has used it.

Deadlock: You induce mental suffering by crushing any hope of escape. After a generator is repaired, The Entity blocks the generator with the most progress for 20/25/30 seconds. You see its white aura during this time.
Hex: Plaything: A hex that toys with a victim's suffering. The first time you hook a survivor, they become Cursed and Hex: Plaything activates a Dull Totem. The Cursed survivor suffers from the Oblivious stats effect until Hex: Plaything is cleansed. Hex: Plaything's totem aura is revealed to the Cursed survivor when within 24/20/16 meters of it. For the first 90 seconds, only the Cursed survivor can cleanse the totem.
Scourge Hook: Gift of Pain: You are the bringer of sweet pain. At the start of the trial, up to 4 random hooks are changed into scourge hooks. You see their auras in white. When a survivor is unhooked from a scourge hook, they suffer from the Hemorrhage and Mangled status effect until fully healed. The first time the survivor is healed, they suffer a 7/8/9% penalty to healing and repairing actions until injured again.
The Cenobite is listed as a "Hard" character to play. He is certainly unique and tricky to play. His teleportation is a bit disorienting and takes some getting used to. Also, managing chains seems to favor a tunneling strategy, which I'm sure survivors will love. Queue times on the PTR are very long as a killer as everyone is vying to play him. But that offers plenty of chances to practice against him as a survivor.
His lore is neat, and the powers are cool, but I don't know that I'll be switching from Pyramid Head to him anytime soon. At least Dead by Daylight is getting another big name in the world of horror. This is a game that only gets better and better.