August 24, 2021
Much to my son's delight, Tripwire Interactive has revealed DLC for the hit "ShaRkPG" Maneater. Truth Quest is set to release on August 31, 2021 and follows our favorite shark and narrator (Chris Parnell) to the mysterious Plover Island Military Complex.
Since the end of the last game, our narrator has been given a name, Trip Westhaven, and relegated to the online video streaming platform "ViewTube". Plover Island is the source of many a conspiracy theory, particularly those involving the naval base nicknamed "Site P" which played host to the US Marine Wildlife Program. From the Tripwire release:
"Fight new evolved creatures – Battle fierce wildlife including new evolved apex predators as you battle your way up the food chain to regain your regional dominance.
Add new evolutions to your arsenal – Feed on military personnel and evolved wildlife to grow your shark further, and find new evolutions to gain more powerful abilities."
The trailer boasts a new hammerhead armor design for the shark and what looks like Godzilla-inspired atomic breath. Also teased are the paramilitary forces and what appears to be a new crocodile apex predator for our anti-hero to face off against. Tripwire has yet to let me down, so this should prove to be a solid addition to an already fun game. 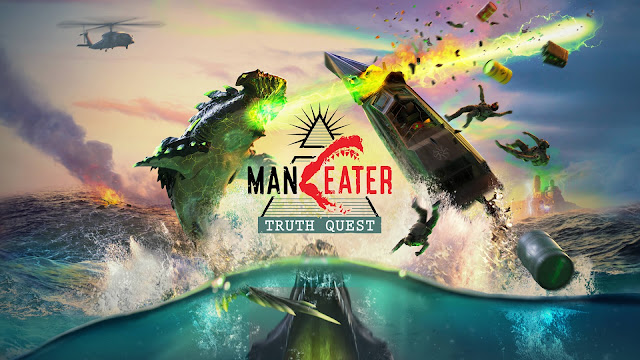