Voidtrain is a survival game set during WWII where a team of engineers has devised a way to escape Nazis through the use of an interdimensional train. Voidtrain is currently in early access and appears to be an Epic store timed exclusive. It comes from NEARGA, a developer/publisher out of Russia. Their previous game was Desolate in 2019. Voidtrain was released in early access on August 12, 2021 and has a TBA release date for Steam. Currently, it is on sale for $29.99.
Voidtrain has been on my radar for some time, ever since the crew at Neebs Gaming mentioned it. I'm not typically one for survival games, but the truly unique concept caught my interest and I made it a point to download. A full review will be coming, but I wanted to share some impressions after an hour with the game.
Like any early access game, bugs are to be expected. Bugs can be reported via the official Discord server, and NEARGA promises that they are aware of most bugs and working on fixes. There's nothing game-breaking that I've found, but it is a bit quirky. Things like shots not registering and movement around the train seem to be the most prevalent. And I'm not even sure that I would consider the latter a bug. It feels more like a game still in development.
To put it in context, you are on a train moving through a void (hence the title) and can tether yourself to go collect resources floating around the train. However, anytime the character gets near the train, they seem to be attracted to it like a magnet. It makes navigating over and around the platforms a bit of a pain.
Character customization is very barebones at this point. There are only a handful of options for faces, hats, and outfits. Resources are very scarce in the first hour. It feels more like Subnautica rather than Ark in this respect. I'm hoping that at some point a resource collector becomes available as it is very tedious to float around and hope the resource you need shows up. As of right now, I don't know a way to target farm specific materials.
The overall design is lovely. I'm a fan of the steampunk and ethereal vibes put forth. Add in some spooky abandoned depots and large creatures swimming through the air off in the distance and the entire game has a relaxing and chill vibe to it. That's not to say there aren't things out there trying to eat or shoot back at you. Based on screenshots, combat does seem to ramp up, much like the complexity of buildable items. 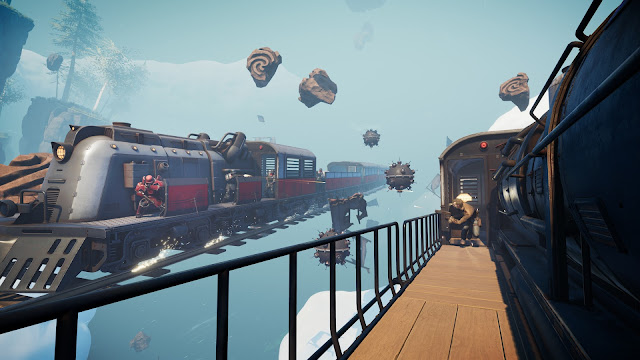 Voidtrain supports four player co-op, but my time has been limited to singleplayer. I'm sure having four people would be far more enjoyable and significantly increase progress. Oh well, I get to take my time with this little treat of a game.
At this point, I don't know if I can recommend it. Like I mentioned earlier, I'm not really a fan of the survival genre, despite playing several games in it. Voidtrain hints at having the same mechanics that typically drive me away from those games, but they do fall in line with the general style. I'll make regular updates as I progress through the game and will eventually post a full review. Stay tuned.
Articles Game Previews