Swedish horror metal icons Ghost are back. The band has recently become very active on social media, which historically means a new album is about to drop. The last album was 2018's Prequelle which introduced fans to the new frontman, Cardinal Copia.

Everything kicked off on September 19th with Ticketmaster posting an updated banner image for Ghost. It showed off an updated look for Cardinal Copia's recent promotion to Papa Emertius IV. Noticeably missing are Copia's sideburns, mustache, and nose paint. This wouldn't be the first time Ghost has redesigned a mask. Papa Emertius III also saw a mask redesign between his introduction and when the third album, Meliora, was released.

The next bit of promotional material to drop was episode 9 in the "behind the scenes" series on YouTube. Episodes 1-8 premiered alongside the release of the last album, so it's safe to say that with this latest upload, the 5th album is right around the corner.

Tomb It May Concern gets ahead of the clamor from fans regarding Papa's new appearance. It is explained that he and Sister Imperator have both recently had some plastic surgery. This wouldn't be the first time for the character of Sister as she's had several actresses in the past with each change in appearance being explained as plastic surgery. Papa then goes on to explain that he's received a new nose and a new chin. It's largely speculated that the larger chin on the mask will make singing easier for the man behind the mask, Tobias Forge. 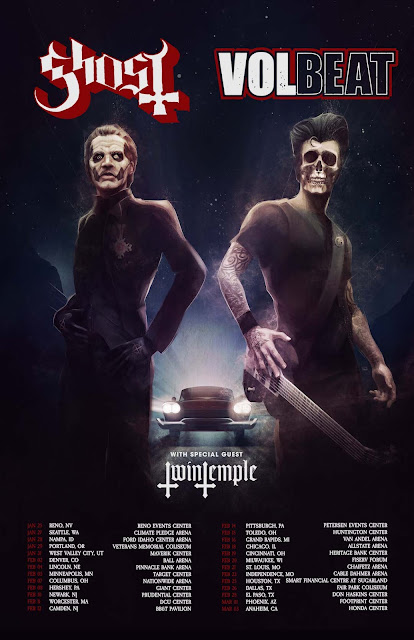 The final bit of news in this trifecta of delights is the announcement of a US tour. Ghost will be teaming up with Danish rock group, Volbeat. Twin Temple will be the opener. The tour kicks off on January 25th in Reno, NV, and concludes March 3rd in Anaheim, CA.  Tickets are set to go on sale September 24th.